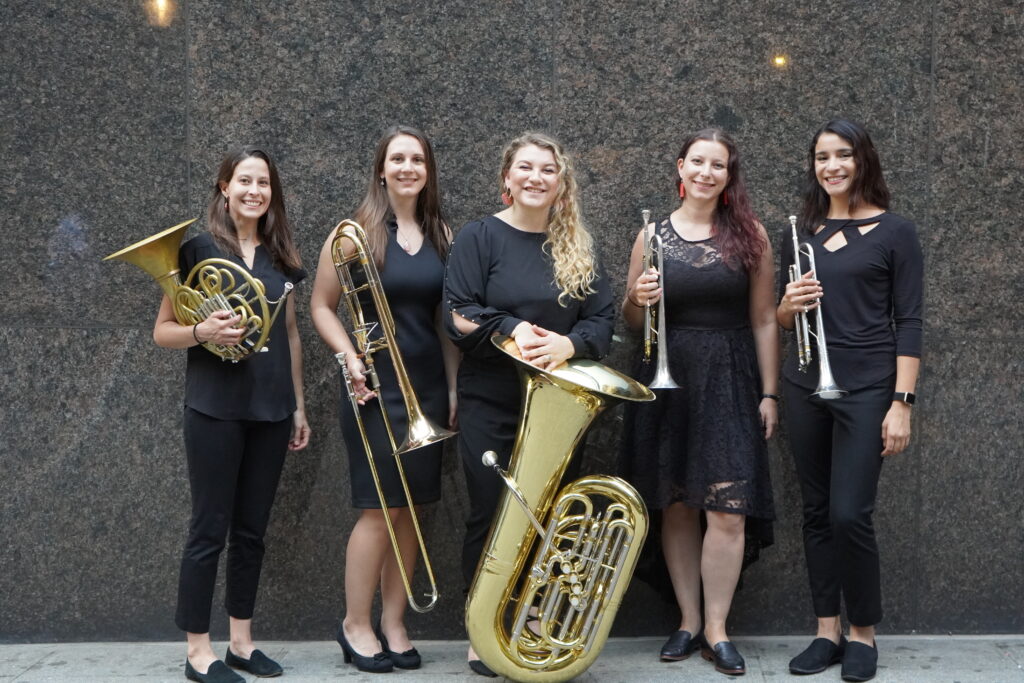 The Cape Cod National Seashore’s amphitheater at the Salt Pond Visitor Center in Eastham resounds on Tuesday, August 16, 7 pm, with “Brass in the Park” – a free outdoor public concert marking the Cape Cod debut of eGALitarian Brass. The award-winning all-women ensemble is dedicated to performing and commissioning new works by diverse composers and breaking boundaries of classical chamber music. Exciting new works by Jennifer Higdon, Joan Tower, Tania Leon and Zoe Cutler will be presented, together with jazz and popular favorites.

eGALitarian Brass is a classical quintet by day and a party band by night, featuring Kate Amrine and Melissa Muñoz on trumpet, Blair Hamrick on French horn, Julie Dombroski on trombone, and Heather Ewer on tuba. “We prioritize performing music by diverse composers with an emphasis on music by women composers, who have often been historically underrepresented in brass repertoire.”

This concert opens the third and final week of the 43rd season of the Cape Cod Chamber Music Festival. eGALitarian Brass is followed by a return of the beloved Borromeo String Quartet, and the Festival closes with a Piano Extravaganza featuring four stellar pianists on two concert grand pianos.

This season, in the interest of public health and safety, and by popular demand, concerts are programmed at 60 to 80 minutes in length without intermission, beginning at 5 pm, with the exception of this free public concert on August 16, performed at 7 pm (see schedule).

Tickets for the Cape Cod Chamber Music Festival concerts are $40 general admission on August 2, 3, 9, 12 and 17; $55 general admission on August 5 and 19.  All concerts offer $15 admission for college students (with ID); and free admission for attendees 18 and under.  The August 16 concert at the National Seashore is free admission for all.  Tickets for the 2022 season can be purchased by phone at 508-247-9400 and online at capecodchambermusic.org.  Cape Cod Chamber Music Festival health and safety protocols for this season will be announced prior to the first concert, following state and local mandates.

Brass in the Park:

An Evening with eGALitarian Brass

Hailed by The New York Times as “A Triumph of Quality,” Cape Cod Chamber Music Festival (CCCMF) has been a presenter of chamber music and a major contributor to the cultural life of Cape Cod since its founding in 1979 by the late pianist Samuel Sanders, a longtime collaborator with Itzhak Perlman.  The Festival’s current Artistic Directors Jon Manasse (clarinetist) and Jon Nakamatsu (pianist) represent the top ranks of American chamber music.  In addition to its annual summer season of concerts,  outreach programs and an annual benefit concert in New York, CCCMF partners with local cultural organizations.