CAPE COD TIMES – Going through a gate can mean leaving something behind. It can also lead to new experiences. It means a little of both for the Cape Cod Chamber Orchestra, in its season-ending program.

Conductor Matthew Scinto’s ensemble performs Sunday in a benefit concert, “Farewell to 2018,” at Pilgrim Congregational Church in Harwich Port. Besides bringing the ensemble’s first season to an end, the concert begins the group’s support of the Fostering a Dream Fund of Cape Cod, a non-profit organization dedicated to offering foster children music and dance lessons, and helping with funds for college applications.

The fund’s support for lessons gives the children “a gift they can take everywhere,” Scinto says. “The fund’s director, Miriam Erickson, is devoted to helping children in foster care on Cape Cod. We are happy to help support them.”

As a spiritual and musical centerpiece for the concert, Scinto has programmed Stephanie Ann Boyd’s “Beyond the Gate.” Set for string orchestra, the 2011 piece grew out of Boyd’s experiences leading a summer camp for children – when she herself was just a high school student in Michigan. Her camp – Fresh Air and Fairies – was an outdoor and imaginative experience, where children spent time in the woods – “beyond the gate” of her yard — chasing dragonflies, eating blackberries and experiencing the world. 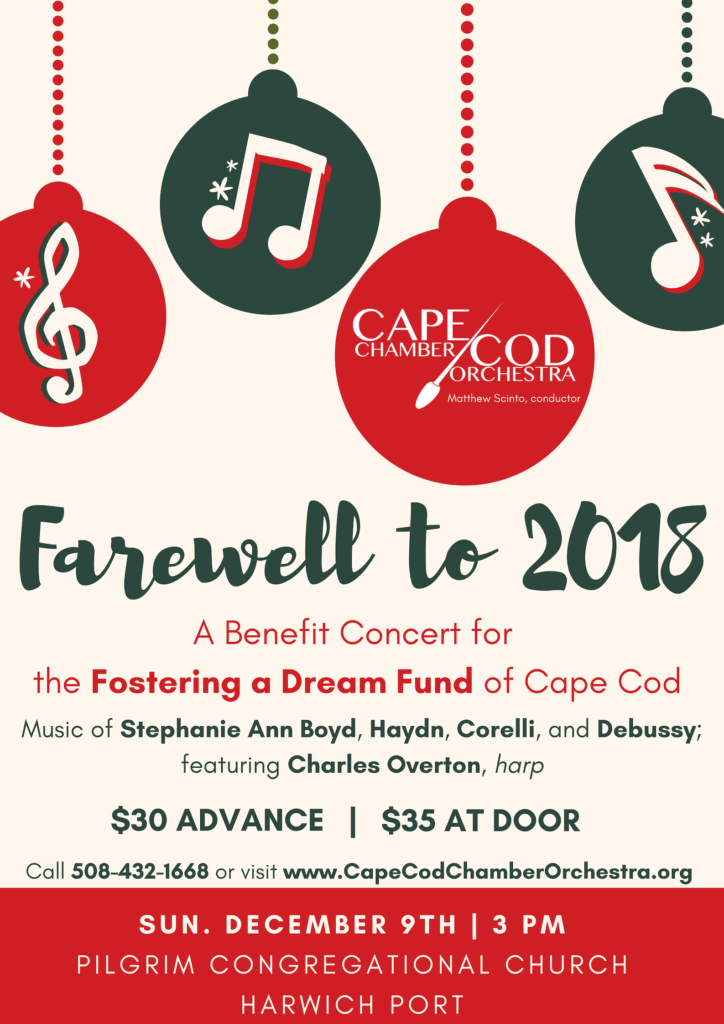 wrote a poem about it at the time,” Boyd says, “and this work takes its inspiration from that. One of my favorite parts of the day was to take (the children) on nature walks, and I sort of glorified that experience for the poem. We would literally go beyond the gate, go outside, and experience a different world.”

“Beyond the Gate” doesn’t use the actual words of the poem, but creates its pictures musically. “There is a lot of cool glissando pizzicato in the cellos and basses,” she says, describing sliding and picking in the low strings. “It’s meant to convey these bugs springing from plant to plant. (The piece) was written for an ensemble of Canadian high school players, and because of that, much of it is simple. There are some harmonics in the first movement, and some other elementary techniques used to convey a contemporary pastorale feeling.”

“‘Beyond the Gate’ spoke to me from the first time I sat with the score,” Scinto says. “The imagery she creates, such as the jumping bugs, or flowing water, was very compelling. Boyd has a smart approach to string writing, using different sounds the instruments are capable of. This makes for a varied palette within homogeneous instruments.”