THE PATRIOT LEDGER – Like a novel tree ornament, a new holiday show can add a lift to familiar holiday traditions. “The Gift of the Magi,” by Americana Theatre Company of Plymouth, is performed far less often than “A Christmas Carol,” but expresses the same spirit of the season with an adaptation of stories by the preeminent American writer O. Henry.

“It’s got tons of heart, a little of that Christmas ache, but also comedy,” said Marianne Savell, who directs the production that runs Dec. 5-16 at Plymouth Center for the Arts.

In the 90-minute musical, a young married couple very much in love argues, stressed by lack of money and work. Though desperately poor, they each decide to sacrifice a prized possession to buy a gift: Jim sells his heirloom pocket watch and buys jeweled combs for his wife’s hair; Della sells her beautiful, long hair to buy her husband a platinum chain for his watch. When it becomes clear the gifts no longer have a purpose, they become something even more important.

“They thought these gifts would make a difference, but the truth is that the gifts themselves become meaningless,” Savell said. “What really matters is the love and support behind them.”

Unlike the biblical magi known as Wise Men or Kings who bring impressive gifts to baby Jesus, Jim and Della are ordinary, poor folk in New York City in the early 1900s. And that has its own Christmas message.

“Ordinary people can give as profound gifts as wise men,” she said.

The musical – based on O. Henry’s “The Gift of the Magi” and “The Cop and the Anthem” – is narrated by a newsboy, who watches the couple and various residents of New York City, in particular a homeless man who tries to get arrested so he can spend the holidays out of the cold in a heated jail cell. Like Tiny Tim in “A Christmas Carol,” the child is the voice of wisdom.

“He’s hoping the audience can see how much the couple loves each other, and the audience will feel love too,” said Savell, who also directed the theater company’s “An Inspector Calls” and “Moonlight and Magnolias.” 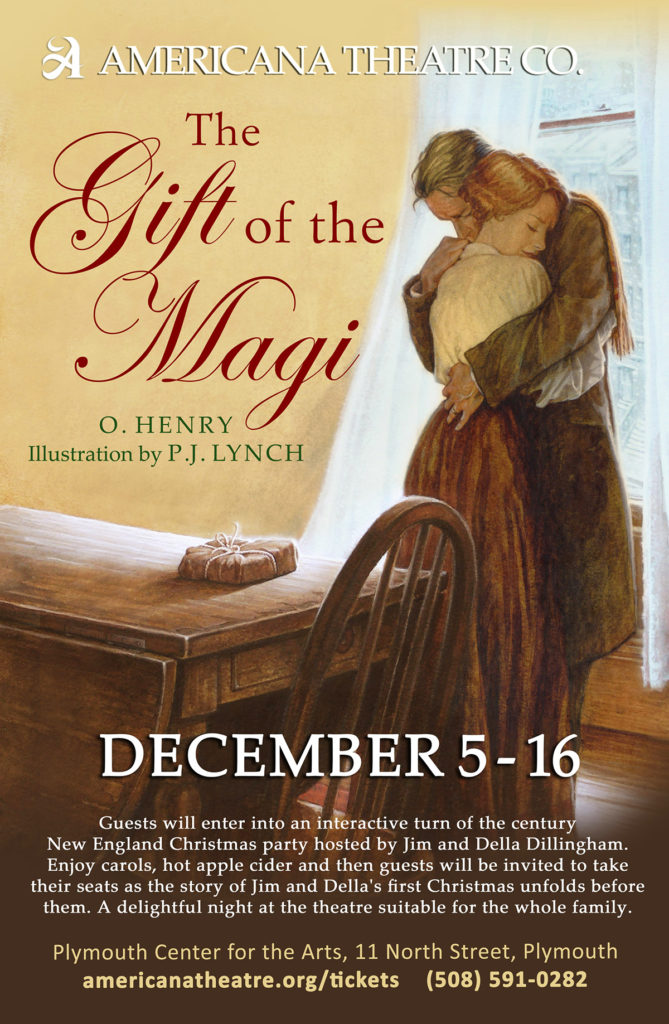 The Gift of the Magi

Premiering in New York City more than 30 years ago, “The Gift of the Magi” is written by Mark St. Germain, who also wrote “Freud’s Last Session,” and music is by Randy Courts. The two co-wrote the lyrics, and a pianist provides the accompaniment. The six-person cast features American Theatre Company members David Friday, Erin Friday, Jesse Sullivan and Gavin Killea, as well as two New York actors. Before the performance, audience can enjoy carols and hot apple cider.