But a painting being created while music is playing – not so much history. Which makes artist Laura Balboni’s appearance Sunday with the CCCO all the more interesting.

“All the pieces on our program are inspired by artists,” says CCCO music director Matt Scinto of this partnership with the Guild of Harwich Artists. “It includes a premiere by Francis Snyder inspired by three different paintings, some Ravel for the impressionists, and some Webern inspired by a handful of German artists from the turn of the 19th century. All the music is paired with artwork that will give it a deeper meaning.”

And Balboni’s presence turns the visual art into real-time event. She will draw a live work during the orchestra’s performance of Edward Elgar’s “Salut d’Amour,” beginning during the preconcert rehearsal, and continuing through the concert.

“Music brings me to the most romantic place,” Balboni says. “To me, real life is gorgeous.” She has painted the orchestra twice previously, in rehearsals for last spring’s inaugural CCCO concert. Balboni also has worked live at weddings and has painted a number of Cape Symphony musicians as part of a “Face the Music” fundraiser for the orchestra two years ago. 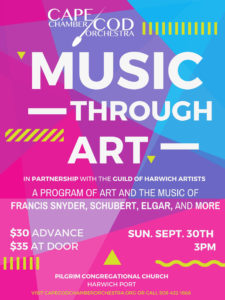 “We have a world premiere on the program, based on paintings by artists from the Harwich guild,” Scinto says. “Laura is not not part of that commission, but this is different way to bring a living artist to the program. She will be painting the orchestra live. Paired with the artwork, I think that the music will have a deeper meaning.”

Francis Snyder’s work, a three-movement piece based on paintings by Erica Strzepek, Anne Briggs and Carroll Sivco, continues his appointment as composer-in-residence with the CCCO. Snyder’s settings of writings from Cotuit poet Judith Askew was the centerpiece of the orchestra’s inaugural concert this past April.

“Francis has a unique sound,” Scinto says. “What strikes me about him is that he is very honest. I never feel like he’s trying to copy anything; it always sounds like a piece by Francis, throughout.

“Our concert in April really came together with the poetry, because his voice is so strong,” Scinto says. “We got a very good response from the audience, and I expect the same for this.”

The three paintings chosen for the commission are quite different: Sivco has worked as a children’s book illustrator, and her “Ava” captures a young artist at work. Briggs’ “Bulb Lines 10″ is a highly charge still life, part of her “Veggie Hybrid” series; Strzepek’s “Hold Space” is a lush watercolor landscape.

“Rather than pick artwork that was similar looking,” Scinto says, “we tried to pick some different pieces. Still, I don’t think there’s a radical shift musically from movement to movement in Francis’ work. I think it really holds together.”

This program launches the first full season of the orchestra. Scinto has concerts planned for December, featuring Haydn’s “Farewell Symphony,” and programs next February, April and July. The April program will feature another premiere from Snyder and will be a collaboration with the Edward Gorey House in Yarmouth Port.