CAPE COD TIMES – Starting an opera company sounds easy. Just be ready to do everything yourself.

Opera Theater of Cape Cod (OTCC) begins its performing life next weekend with “The Tragedy of Carmen” in Wellfleet and Cotuit. For founding directors Ethan DePuy, Joseph Turbessi and Eileen Christiansen, every aspect of the production appears on the to-do list.

Turbessi conducts, wrote the libretto translation, and accompanies on piano. Christiansen, director of production for the ensemble, sings the title role – the sexiest cigarette factory worker in history.

DePuy, a well-regarded tenor who has reprised numerous roles from baroque repertory to contemporary, provides stage direction for this reworking of Bizet’s classic.

“We’re all doing about five or six different jobs,” DePuy says. “I thought I was going to act a role in this production, but not this time. I have a friend who ran an opera company for 40 years, and he told me to expect this sort of thing.”

The new company brings opera back to Cape Cod stages after a hiatus of several years. It’s a welcome addition to the vibrant theater, classical music and artistic culture that flourishes here, and DePuy and his colleagues realize that the Cape has great potential for a professional opera troupe.

“We’re going to take a slow and steady approach,” he says. “But we’re really hopeful. The contacts from the arts community, and our colleagues, have been encouraging. We’ll be testing things out this first season, and take it from there.”

What: “The Tragedy of Carmen” 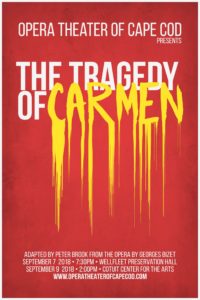 The opening staging is a sure-fire winner. Even non-opera lovers know the story of Carmen, the bewitching gypsy, who dies tragically in the end but not before entertaining everyone with an alluring array of habaneras, seguidillas and flamenco styles – including the famous “Toreador Song” – from Bizet’s finest opera.

In this version, adapted by Peter Brook, “the cast is scaled down, the chorus removed, and the parts are revised for piano,” DePuy says. “The intimacy and drama of the production really get in your face. And it’s a pleasure to hear this score in the hands of an virtuoso pianist.”

“This will be a moment to connect with Cape audiences,” DePuy says. “We want to build momentum. We’ve got an all-star cast – each one an excellent singer, and all risk-takers dramatically. I don’t think the community will know what hit them.”