McGRATHPR.com – Cape Cod Chamber Orchestra (CCCO), the region’s newest professional orchestra, announces Navigations, its inaugural full season of four performances, launching with Music Through Art, an immersive collaboration of art and music, on Sunday, September 30, 3 pm, at Pilgrim Congregational Church, 533 Main Street, Rt. 28, Harwich Port.  The event is a unique partnership with the Guild of Harwich Artists, presenting a program inspired and complemented by visual art.  The orchestra is conducted by Music Director Matthew Scinto.  A reception follows the concert with an opportunity to meet the artists, view their work, and meet the musicians.

CCCO’s first season Navigations is inspired by Scinto’s vision for the future of classical music on Cape Cod.  He is fulfilling his mission to collaborate with local Cape individuals, arts organizations, and causes to create a unique concert experience of high quality, enriching, and memorable orchestral music. Featuring living composers is at the forefront of his plans; bringing audiences closer to music and the beauty found across Cape Cod communities.

“For this first season, I wanted to explore how the orchestra could navigate areas of music, the Cape, its people, and its stories. The marriage of music and the spirit of Cape Cod makes for a beautiful and nostalgic experience for all of us,” shares Scinto.  “Classical music can be a highly diverse experience. Musical beauty takes many forms, leaving an indelible impact. I hope this first season makes that apparent.”

The season’s first concert Music Through Art is a mixed music/media experience showcasing the orchestra’s Composer-in-Residence Francis Snyder’s latest commission.  His composition is inspired by the work of three Guild of Harwich member artists, whose fine art premieres at the performance, offering beautiful imagery to accompany the music.  The three inspirational paintings include Erika Strzepek’s “Hold Space”, Anne Briggs “Bulb Lines 10” and Carroll Sivco’s “Ava”, on display during the performance.

Artist Laura Balboni debuts a new painting based on Elgar’s “Salut d’Amour”, on the afternoon’s program, as well as creating a working studio on site, painting live during the concert.

In addition to Snyder’s premiering composition, CCCO explores impressionist art through the music of Ravel’s “Pavane for a Dead Princess”, and the height of German Expressionist art with Anton Webern’s “Five Movements for Strings”. Both feature the stark contrast from visual art to musical language. Schubert’s pastoral and joyful “Symphony No. 5” is accompanied by displays of art created by Monomoy Regional High School students, other local artists, as well as 19th century landscape artists, such as Caspar David Freidrich and Horatio McCulloch.

Harwich resident and artist Erica Strzepek is inspired by ocean waves, falling snow, prismatic sunsets and swaying sea grass, taking note of her surroundings in her paintings.  She is a Bachelor of Arts graduate of Franklin Pierce University. She primarily works in watercolor, which she shares “lends itself to the stop-and-start work style I need as a busy mother of three young boys.” Her color palette includes American-made, natural mineral pigment watercolor paints, adding natural shimmer and granulation to her work.

Artist Anne Briggs works primarily in watercolor with a style that combines the descriptive lively lines of pen and ink drawing with interpretative and colorful washes of watercolor. Her favorite subjects are organic in nature, from landscapes and seascapes to vegetable, ﬂoral and tree portraits. She tries to capture her subjects’ unique “personality” and sense of place, and sometimes the symbolism and generative nature of particular elements, such as bulbs and trees that transform with the seasons. Essentially an intuitive painter at heart, she often creates and paints totally out of her imagination, as seen in her Veggie Hybrid paintings of vegetables that don’t exist in reality.

Citing art as the wellspring of her life, fine artist Carroll Sivco first was recognized for her talent when her drawing was displayed on a children’s TV show at age four. Creating became her impetus to study art, develop her skills and discover her capabilities, deriving ideas from observing people and places. Simple life events inspire her to capture moments of everyday living, seizing the light, color, movement, revealing part of her inner self. While studying children’s book illustration at The Savannah College of Art and Design, she renewed her inspiration as a writer, resulting in her self-written and illustrated children’s story “Just Like Aunt Willie”.  She has lived, painted and exhibited on Cape Cod, Hilton Head Island, SC, and Westchester and Suffolk Counties in NY and Block Island, RI.

Brewster-based artist Laura Balboni is multi-lingual in the arts as a viola performer of classical music and a fine artist.  Her background in viola greatly enhances the rhythm, dynamics, color and texture of her art, mostly in the mediums of pastels and painting.  She has earned many accolades and awards on both music and art fronts, including performing in New England Conservatory’s youth orchestra as assistant principal viola and honors quartet program, and the prestigious National Honors Orchestra at the Kennedy Center, Washington DC. She earned a Bachelor of Arts degree in Viola Performance from Peabody Institute of Music, Johns Hopkins University, and has also studied fine art at Maryland Institute of Art and Rhode Island School of Design, as well as the Pulido Studios and John Kilroy Fine Art Academy.

Tickets to Music Through Arts are $30 general admission, $35 at the door, $15 for students ages 12 through college age, children under 12 are admitted for free. Tickets are available at www.capecodchamberorchestra.org, by calling 508-432-1668, or at the door by cash or credit card. 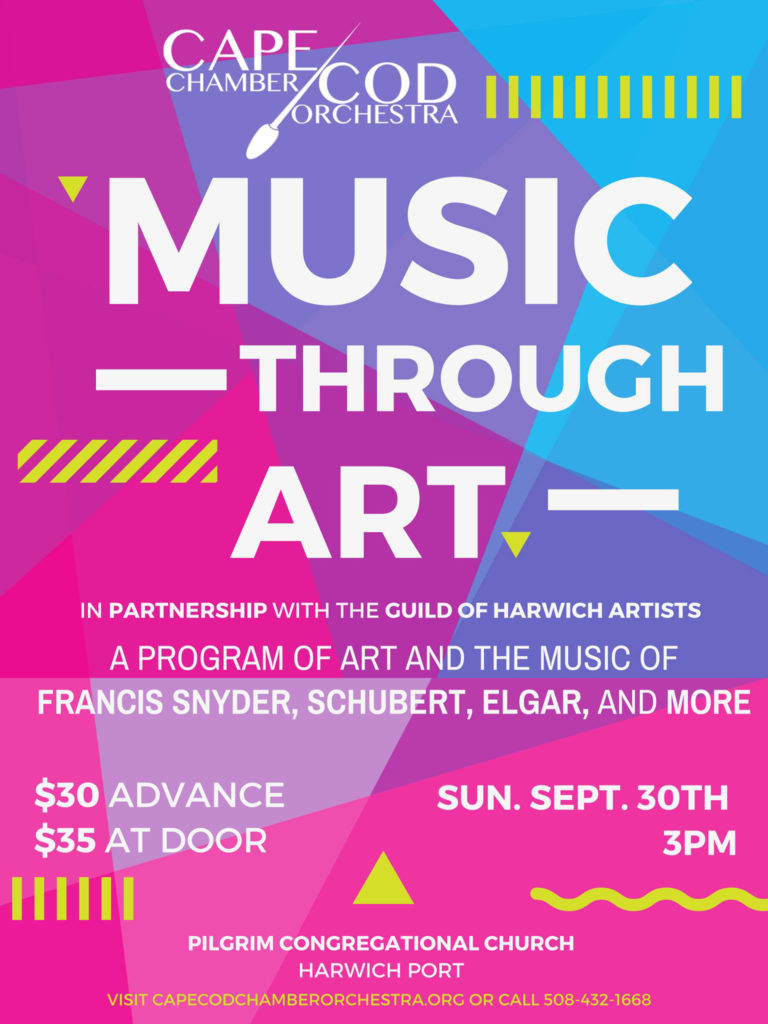 Matthew Scinto is an emerging conductor based in Cape Cod, where he currently serves as the Assistant Conductor of the Boston Civic Symphony under Music Director Francisco Noya. Mr. Scinto received his Doctor of Musical Arts degree in Conducting from Boston University, where he was a student of Stefan Asbury and David Hoose and twice received the Conducting Department Award for Excellence in Conducting. Mr. Scinto has studied conducting at the prestigious Tanglewood Music Center, and was invited back again in July 2018. While at Boston University, Mr. Scinto served as the Assistant Conductor of the Boston University Symphony, Chamber, and Opera Orchestras where he covered and conducted in numerous concerts and opera productions, including Boston University’s recent production of Le Nozze di Figaro in 2017. Matthew Scinto has worked with conductors Bramwell Tovey, Ken-David Masur, Stefan Asbury, Diane Wittry, Daniel Hege, Marin Alsop, David Effron, and Markand Thakar. He has conducted such orchestras as the Baltimore Chamber Orchestra, Symphoria, the New Haven Civic Orchestra, the Brandeis-Wellesley Orchestra, the Greater Bridgeport Youth Orchestras, the Indian Hill Sinfonia, the Miami Music Festival Orchestra, the Syracuse University Symphony, and the Boston University Symphony and Chamber Orchestras.

Francis Snyder is a Boston based composer and conductor and holds a Bachelor’s of Music Theory and Composition degree from Boston University where he studied with Professors John Wallace, Jason Yust, and Ann Howard Jones. His compositions have been performed by members of many of Boston’s music conservatories and he has conducted many of them himself. Since 2014, he has been the composer in residence at the Acadia Repertory Theater in Somesville, Maine, and composes music for their productions each summer. In 2016, his piece Parks and Ponds was commissioned and premiered by the Blue Hill, Maine group The Bagaduce Choral to celebrate the centennial of Acadia National Park. In the spring of 2017, he was chosen as the 2016/17 winner of the Boston University Orchestral Composition Competition. His piece Organic Appreciations was subsequently premiered by the Boston University Symphony in April of that year. He has also worked with many musical pit orchestras and has conducted performances of ‘The Wedding Singer’, ‘Anything Goes’, ‘Les Miserables’, and others.

Committed to artistic integrity and excellence, the Cape Cod Chamber Orchestra’s mission is to connect the diverse arts communities and individuals of Cape Cod inclusively. By collaborating with other disciplines of art and culture, the Orchestra aims to create unique concert experiences while providing exciting, enriching and memorable orchestral music.  Featuring living composers is at the forefront of the orchestra’s mission; bringing audiences closer to the music of modern time, positioned as an essential and educational element to each performance program.  Other repertoire champions the works of living composers, as well as the music of the classical canon.  For more information visit www.capecodchamberorchestra.org, email info@capecodchamberorchestra.org, or follow Cape Cod Chamber Orchestra on Facebook and Instagram.