Speaks to industry crowd of 300,

McGRATHPR.com – The Massachusetts cranberry industry gathered on Wednesday to celebrate the 131st Annual Meeting of the Cape Cod Cranberry Growers’ Association (CCCGA), a tribute to cranberries as the Commonwealth’s largest agricultural food crop.  More than 300 cranberry growers and their employees, industry leaders, businesses that provide goods and services to the industry, legislators and federal and state agencies were present. Massachusetts Governor Charlie Baker, continuing his commitment to the official state fruit’s industry, arrived to address the attendees and peers, later visiting a CCCGA member farm to witness firsthand the innovations in progress to sustain the challenged agricultural industry.

Baker addressed the crowd, speaking to the product innovations made by the industry, but also recognizing the challenges facing growers, conveying his commitment to help sustain the cranberry industry in Massachusetts.  Baker referred specifically to the recently signed Environmental Bond Bill which includes investment in the UMass Cranberry Station in Wareham, a major source of horticultural research and support for the industry on new ideas and new ways of farming, and the re-creation of the Agricultural Innovation Center, a source of state funding that has been obsolete for more than a decade.

“The cranberry growers of Massachusetts are appreciative of the governor’s support and are especially encouraged to hear of his commitment to assist the industry on multiple levels from research to innovation,” said CCCGA Executive Director Brian Wick.

Longtime industry supporter Congressman Bill Keating (D-MA 9th District), accepted the Cape Cod Cranberry Growers’ Association’s 2018 Legislative Leadership Award for his years of service to the cranberry industry, including co-chairing the congressional cranberry caucus and most recently spearheading an effort to lift tariffs imposed on cranberries in the European Union, resulting in elimination of more than 60% of the industry’s tariffs from that critically important export market.  Ninety percent of the state’s cranberry acreage falls within Rep. Keating’s Congressional district.

“Representative Keating has persisted as a tireless supporter of Massachusetts cranberries,” said CCCGA Board President Rob Rubini.  “His most recent work to eliminate much of the tariffs on cranberries demonstrates his tenacity and capability, working on our behalf.  We are proud to honor him for his dedication.”

Senator Mike Rodrigues of Westport and Representative Bill Straus of Rochester, both of whom serve on the UMass Cranberry Station Board of Oversight, addressed the audience with the latest on legislative and budgetary efforts on Beacon Hill. Massachusetts Agricultural Resources Commissioner John Lebeaux, co-chair of the Cranberry Revitalization Task Force, Fish and Game Commissioner Ron Amidon, and Board President Rubini also addressed those present.

Statistician Sherry Deane from the USDA National Agricultural Statistics Service (NASS) closed the meeting by delivering the 2018 cranberry crop forecast for the United States, divided into five primary growing states – Massachusetts, New Jersey, Oregon, Washington and Wisconsin.  According to the report, Massachusetts is projecting a crop of 1,895,000 barrels (each barrel equals 100 pounds), down approximately 1% from the 2017 NASS crop figures. Overall, the U.S. cranberry crop is projected to be 8.63 million barrels, up 3% from the 2017 harvest.

Massachusetts remains second in cranberry growing production in the country, at approximately 23%.  Wisconsin maintains the number one position, yielding about 64% of cranberries grown in the U.S.

“This season has been challenging for growers from a weather perspective. Earlier in the summer the maturing fruit faced high temperatures, high humidity and lack of significant rain to now a spate, of dare I say, almost too much rain.  Our growers have been thrown a constant barrage of weather conditions to manage,” shared Executive Director Wick.  “Despite these trials, many growers are optimistic that they will have a strong crop. If all goes well from now until harvest, we may be fortunate and exceed the NASS crop estimate with a nice bounce back from the lesser crop of 2017.” 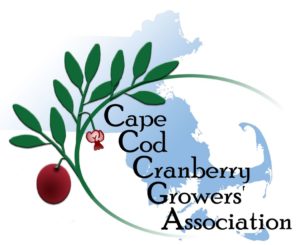 The Cape Cod Cranberry Growers’ Association represents more than 325 cranberry growers in Southeastern Massachusetts, Cape Cod and Nantucket. Cranberries are the largest agricultural food commodity produced in Massachusetts, with an annual crop value of $68.9 million.  Massachusetts is home to 30% of all North American cranberry acreage and according to a recent Farm Credit East Knowledge Exchange Report, provides over 6,900 jobs and a total economic benefit of over $1.4 billion to the Massachusetts economy. For further information, contact Brian Wick, Executive Director, Cape Cod Cranberry Growers’ Association, bwick@cranberries.org or at 508-866-7878.  For the latest updates, visit cranberries.org or follow the Association on Facebook and Twitter.