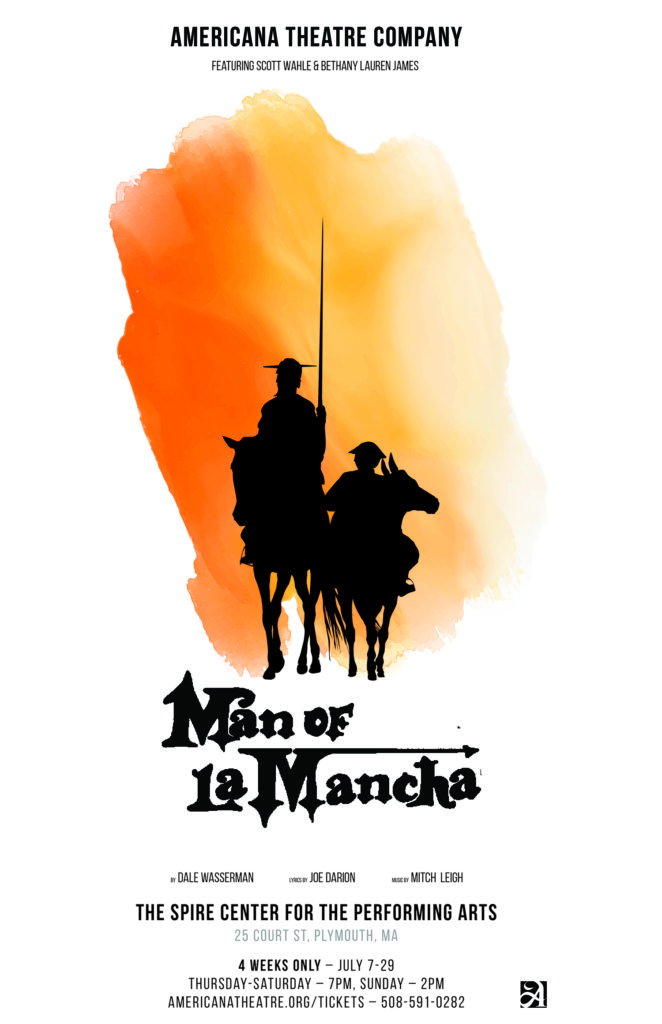 SOUTH SHORE CRITIC – As previously noted in a review of a recent regional production of Man of La Mancha , for theatergoers who were fortunate enough to attend productions of this 1959 “musical play” on Broadway, or one or more of its four New York revivals in 1972, 1977, 1992, or 2002, this show remains a beloved memory. Based on the 1965 novel Don Quixote (written between 1605 and 1615) as well as other works by Miguel de Cervantes, it was nominated for seven Tony Awards, winning five (including Best Musical). It had first seen the light of day as a non-musical teleplay by Dale Wasserman in 1959, later adapted by him for the musical stage (at Goodspeed Opera House, also the original home of Annie), with Music by Mitch Leigh and Lyrics by Joe Darion. It was Wasserman’s ingenious move to portray the eccentric title character in a play-within-a-play-within a play, a tribute to the historical fact that Cervantes himself, a contemporary of Shakespeare, was not primarily a poet but first and foremost a playwright and actor on the road with his own little troupe. This “musical play” reflected the idealistic hopes of the time, becoming known primarily for its best song, The Quest , also known as The Impossible Dream (especially among Red Sox fans in 1967). It was also acknowledged as providing one of the rare Broadway musical male lead roles, along with the likes of Tevye and Harold Hill. It survived its being made into an almost completely forgettable film in 1972 starring Peter O’Toole and Sophia Loren, neither of whom could carry a tune in the proverbial bucket (only O’Toole was dubbed). The question for modern audiences is this: does it still speak to them as it celebrates idealism and hope, in a more cynical age? And what of the line (which obviously has quite a different connotation today): “facts are the enemy of truth”?

Alas, the question remains unanswered, at least with Americana Theatre’s current production, featuring a trial by the Spanish Inquisition (1478). One who had never seen a production of this show could be forgiven for not grasping the logic of the plot (and at times it is intrinsically illogical), with a weirdly unsettling sound that preceded the performance, consisting of water dripping that suggested Chinese water torture. At least in this production (as opposed to those other regional versions) the cast consisted of excellent actors in singing roles that were within their comfort zones. It also followed the explicit instructions by the librettist that Cervantes appear to grow old and gaunt (applying makeup and beard as he assumes the title role). But then there is playwright Wasserman’s note that “the play is performed without intermission”, which, as with most versions lately, was ignored, leading to the breaking of tension. Interrupting the natural flow of the original text fails to grasp and/or convey the fundamental message of the piece, a message we could all use in these uncertain times.

Once again these actors save the day, (as they did with last season’s “Lucky Stiff”, a comparatively inferior work). Most notable was Bethany Lauren James as Aldonza, the whore who evolves into Dulcenea, the “noble lady” chosen by the knight-errant Don Quixote (Scott Wahle, who grew into the role despite technical sound issues). She becomes his sole convert, displaying the power the play should possess. Other standouts were Ruben Navarro as Sancho Panza and Derek G. Martin (also the show’s choreographer) as the Padre. The creative team included Director Dr. Michael Kirkland, Music Director Nancy Sparklin, Scene Designer David Friday, Lighting Director Heather M. Crocker, Costume Designer Brian Kenerson and Sound Designer Gary Sjolin.

This was another demonstration of the breadth and depth of this company, as cast members contributed additional creative input. One would be wrong, however, to mistake this as an indication of a Mickey-and-Judy putting-on-a-show effort. It’s a well coordinated ensemble effort that’s worth seeing and a revelation of what this company is capable of producing.
Read more . . .
By Jack Craib, South Shore Critic
Photos by Denise Maccaferri
Tags: Americana Theatre Company, Arts, Bethany Lauren James, Don Quixote, Man of La Mancha, Plymouth, Ruben Navarro, Scott Wahle, South Shore, Spire Center, Summer musical, Theater, theatre