WGBH NEWS – This Week, Jared Bowen reviews some of the best new theater in Boston, including “Born For This,” ‘Bernstein’s On The Town,” “Noir Hamlet,” and Cirque du Soleil’s “Luzia.”

Born For This, presented by ArtsEmerson at the Cutler Majestic Theatre through July 15

Experience the real coming-of-age story of gospel singers BeBe and CeCe Winans in “Born For This” presented by ArtsEmerson. With original music and lyrics from BeBe Winans, this musical follows the adolescent Winans as they move from Detroit to Pineville, North Carolina to work with Jim and Tammy Faye Bakker on the Praise The Lord (PTL) network. “Tammy Faye had a personality that was bigger than Earth, and at the same time she had the biggest heart that you could ever imagine,” says Winans. “Jim and Tammy became our parents and promised my mom and dad they would take care of us. And they did.” When the gospel siblings rapidly rise to stardom, BeBe and those around him must contend with the temptations of fame as they struggle to keep together what really matters: faith and family. “Here you’ll find majestic voices and powerhouse gospel numbers,” says Jared.

Bernstein’s On the Town, presented by the Boston Pops at Tanglewood in the Koussevitzky Music Shed on July 7

Join Keith Lockhart and the Boston Pops for a special concert performance of “On the Town.” Based on the classic musical by Leonard Bernstein, whose first professional conducting job was with the Pops, this semi-staged production tells the story of three soldiers on leave for 24 hours in New York City. Featuring iconic Bernstein songs like “New York, New York” and “Some 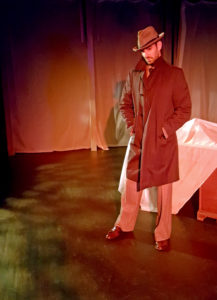 Other Time,” this fun and lively production is directed by Tony Award-winner Kathleen Marshall and features an all-star cast including Tony Award-winner Brandon Victor Dixon, Andy Karl, and Tony Award-winning actress Andrea Martin. “This is life lived until the halcyon hours of leave expire with sunrise,” says Jared.

Noir Hamlet, presented by Centastage at the Boston Center for the Arts through June 30

The year is 1949, and young “Hammy” has just taken over the family detective agency. His first job? Solving his father’s death. Presented by Centastage, “Noir Hamlet” is an original theatrical production that reimagines the classic story of Hamlet through a unique film-noir prism. Trench coats and red herrings abound in this small but mighty production that Jared calls “wicked fun!” “Noir Hamlet” is directed by Joe Antoun and written by John Minigan.

Luzia, presented by Cirque du Soleil under the big top at Suffolk Downs through August 12

At Suffolk Downs, discover a fantastical world of acrobatics in Cirque du Soleil’s latest production. Set in a mythical Mexico, “Luzia” marks the first time Cirque du Soleil has incorporated water into a touring show. In addition to the death-defying and breathtaking acts that have come to define the company’s work, “Luzia” presents elements of Mexican folklore and culture exquisitely displayed in a production that Jared says is “probably the most beautiful Cirque du Soleil show I have ever seen.”

Fabulous Fall 50 – The arts of autumn are rich