Imagine Shakespeare’s famed Danish prince as a Philip Marlowe-like sleuth with his own Elsinore Detective Agency. Now put Little H in 1949 Los Angeles with a street savvy assistant named Rae-who combines the love and loyalty of the secretary and the voice and vivaciousness of the vocalist in the hit Broadway musical “City of Angels.”

Give the plot of the original tragedy a clever surprise and the dialogue an enjoyable blend of humor and wit. What you have is a “Noir Hamlet,” a delightful Centastage world premiere at the Boston Center for the Arts’ Plaza Black Box Theatre.

At the same time, scene set changers dressed in black fedoras and trench coats in line with the detective’s own attire move so expertly that their efforts do not distract from Minigan’s re-imagining. 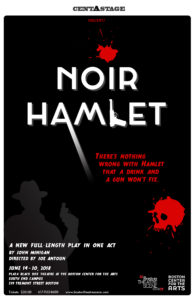 Never a carbon-copy adaptation, “Noir Hamlet” proves an inspired take-off that keeps key elements of Shakespeare’s plotting, pays homage to 20th century film noir gems like “The Big Sleep” and “Chinatown” yet achieves a theatrical rhythm consistent with Minigan’s own alternately sly and witty dialogue. Look for a song inside the play-“Send Me To the ‘Lectric Chair” performed by Rae- during which Little H. tests Claude’s reaction a la the play within the play to “catch the conscience of the king” in “Hamlet.”

Watch for a funny and telling penultimate morgue scene with a gurney twist that calls to mind the skull of Yorick and graveyard comic relief in Shakespeare’s play. A talkative rival detective named Paolo Niro somewhat resembles Claudius’ buffoonish advisor Polonius. Shakespeare buffs will notice that there are no counterparts to Ophelia or her brother Laertes.

There is no Horatio either, though one could argue that Rae-like Horatio-has a key moment regarding a pivotal saxophone connected with the Ghost of Big H and a moving moment with Little H that could allude to his bromance-like camaraderie with his best friend.

Antoun’s stellar cast captures all the demands of Minigan’s take-off. Paul Melendy, also memorable in the Byers play, has the right inquisitive spirit and spunk in a performance that calls to mind Bogart and Nicholson. Cristhian Mancinas-Garcia gives a strong gender-bending performance as both trusting and enigmatic Rae. His rendition with fine accompaniment on piano by Jon Goldberg is a highlight. Robert D. Murphy-in a strong triple turn-has the vindictiveness of Ghost, the slithering geniality of Claude and the over- assuredness of Paolo Niro. Liz Adam catches Gertrude’s tough love with Little H and displays a demeanor that calls to mind Bacall.

“Hamlet” fans and noir aficionados should embrace Minigan’s light-hearted yet verbally rollicking take-off. Everyone is likely to re-explore the works of Raymond Chandler and Shakespeare’s great tragic discourse on inner truth and integrity after seeing Centastage’s captivating “Noir Hamlet.”