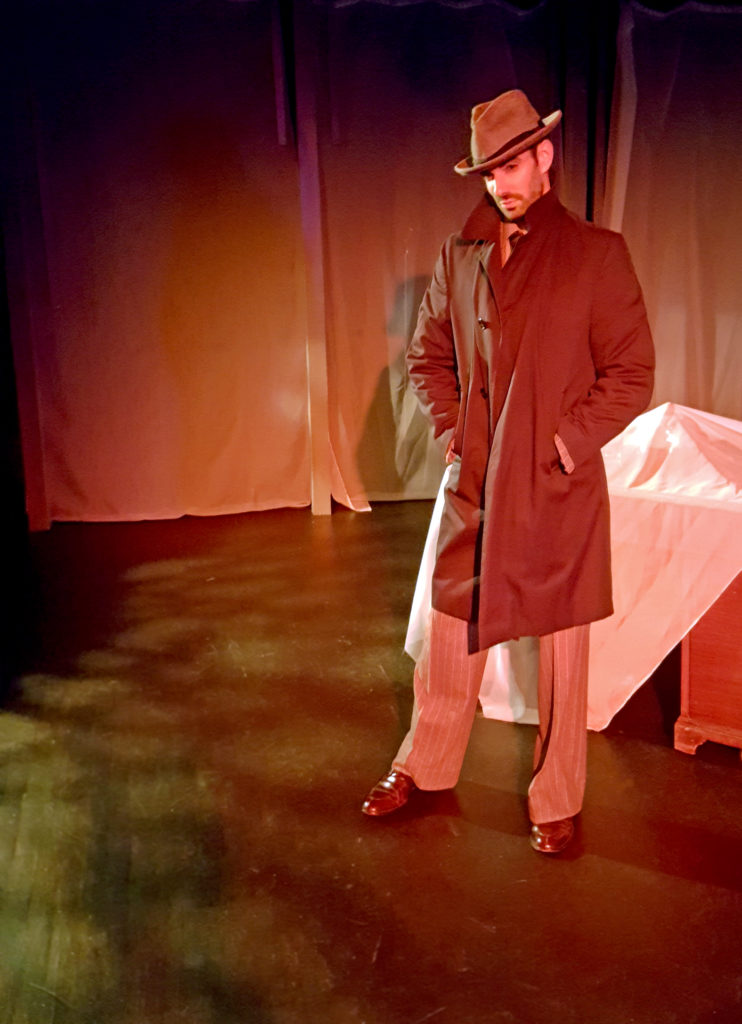 EDGE MEDIA NETWORK – One of the Bard’s greatest tragedies distills with unexpected effectiveness into a 90-minute side-splitter. Here’s the dope: Little H (Paul Melendy) is a private eye working his first case, namely the murder of his own father. But that’s not the juiciest part of the tall tale. His own father has come back from the great beyond to put him on the trail of the killer!

Imagine Shakespeare’s “Hamlet” as a 1949 noir set in Los Angeles. Actually, you don’t have to, because New England playwright John Minigan has done it for you, and the result is hard-boiled comedy. Little H – his full name is Hamlet, of course, and he was named after his now-dead father – has a short list of suspects, among them his uncle Claude (Robert D. Murphy) and his late father’s secretary, Rae (Cristhian Mancinas-Garcia), a luscious dish for whom Little H is carrying a torch. As it happens, there’s another, more experienced PI, Paolo Niro (Murphy), who likes Little H… not on Facebook, that is, but as a candidate for the sobriquet of killer.

Into this roundelay of suspicion swans Little H’s mother, Gertrude (Liz Adams, in full Robin Wright-from-“House of Cards” mode), and just as Little H is wondering aloud just what among his father’s former possessions his bathrobe-stealing uncle might not “slide into” next.

Such wordplay is what this play full of words (“Words?” – Words!) is built from. Just because you read the original doesn’t mean you know where Minigan is going to take you – much less what pop culture references he’s going to hit along the way. A coroner who works a human skull as though it were a wise-cracking mannequin? Overlapping romantic triangles? A Tarantino-esque standoff in a morgue? Why not?

It’s been going on three years since the last Centastage production, but the wait has been worth it. “Noir Hamlet” ranks up there with past Centastage productions like “The Fakus” and “Academy Fight Song.” Joe Antoun directs a terrific cast that masters some pretty slippery dialogue (not to mention even more slippery character changes and plot twists), and the cast make this pitch-black comedy a hoot. Sound designer Rick Brenner makes with the ghostly saxophone, while Anny Shenker handles the scenic design duties. Sea Pierot’s lighting helps carry the mood; costume designer Richelle Devereux-Murray glories in the 1940s wardrobe.

“Noir Hamlet” continues through June 30 at the Plaza Black Box Theatre at the Boston Center for the Arts. Tickets and more information at https://www.centastage.org