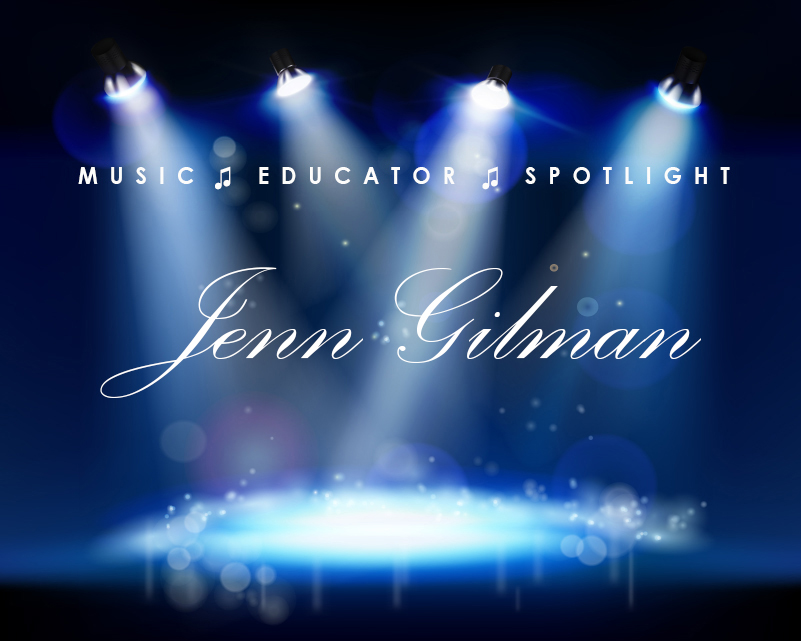 The end of the school year brings about many changes for students as the progress through the Scituate Public Schools system, while they move on to new grades and interests.  Likewise, it brings vast change to the community’s school music program, as longtime educator Jennifer “Jenn” Gilman retires from Scituate Public Schools after 30 dedicated, successful years serving as a cornerstone of music education to thousands of students and families in the community.

As a near lifetime musician, Jenn’s experience began at an early age, when she engaged in clarinet lessons at the age of 9.  The musician gene in her father’s family certainly carried over, as Jenn’s many teachers witnessed her enthusiasm and encouraged her to pursue music.  “I didn’t know I was good at it, I just liked it!” shares Jenn.  In high school, she played basketball, aspiring to become a professional basketball player, an idea which drew opposition from her mother.  As a member of her high school marching band, at the end of her senior year, she began teaching clarinet to young students, at only age 9, the age she was herself when she first began to play the instrument.  It was through this teaching experience, at the age of 17, that the aspiration surfaced to become a professional musician, and the seed of possibility of teaching music was planted.

Upon graduation, Jenn attended the University of Wisconsin-Milwaukee (UWM) on a four-year scholarship, earning a Bachelor of Fine Arts degree.  Her intense coursework was made up of courses in art, music and theater history.   During her time at UWM, she strengthened her performance skills, and really developed and sharpened her work ethic playing the clarinet.  She served as first chair in the band and the orchestra, performing several recitals while earning her undergraduate degree.

Jenn then returned to Boston to attend the prestigious New England Conservatory, earning her Masters of Music in Clarinet Performance. Upon graduation, she helped form the Brookline Wind Quintet, a group of musicians dedicated to performing contemporary music by new composers. She spent the next 15 years performing with the wind quintet, including a concert at legendary Carnegie Hall.  The ensemble later evolved into the group New Art Winds, continuing her opportunities in performance. Although Jenn loved creating music, she always struggled with the exposure of stage appearances.  She also knew that she needed to increase her income in order to afford the expense of city living.  Eager to combine her passion for music and her love of teaching, she set off to earn a degree in music education from the University of Massachusetts Lowell in 1987.

Jenn’s impressive tenure with the Scituate Public Schools began in 1988 when she was hired to teach elementary instrumental music at The Wampatuck School, teaching 200 students in her first year, an opportunity that she embraced with joy.  “One thing I have always known about myself from a very early age is that I love kids. I love their energy, playfulness and sincerity. This spark drew children to me by nature, sometimes it made me feel like the pied piper of music.” says Jenn.  She not only wanted to share her love of music with her students, but to help them to create and develop their own style of music in a safe space where they could explore their artistic and imaginative side. “Looking into my student’s eyes and seeing their vulnerability, I promised myself to take what they give and be critical, but to build trust and commit to helping them stay open to making their own music.”  Since being hired in 1988, Jenn has taught at every school in the Scituate system, estimating that she has taught more than 6000 students during her career! 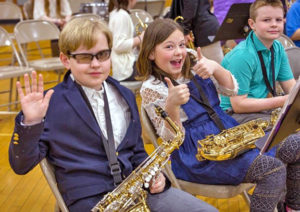 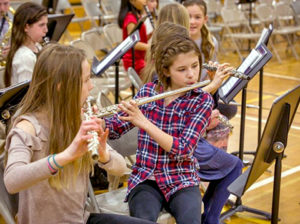 With students crossing 3 career decades, she often served several children in each family, many still residing in Scituate.  She enjoyed catching up with those who attended the popular at Scituate’s All-Town Band concert this spring.  When the crowd was asked how many students had “Ms. Gilman” as a teacher, an astounding 500 people raised their hands and cheered!   Emma Dwyer, a Scituate High School class of 2017 graduate said “Ms. Gilman didn’t just teach me how to play rhythms or what finger went where; she taught me how to perform and play with musicality, how to express myself through the music, and how to play more than what’s printed on the page. Her passion for music was so evident in her teaching! I’m so thankful to have had this amazing teacher to guide me through my musical journey. I couldn’t have asked for a better educator, musician and individual to teach me for nine years. She truly is an inspiration, I wish her nothing but the best in the upcoming years!”

“Ms. Gilman taught me to shoot for my dreams,

no matter how small or large!”

She continues “She was always happy to stay a little later to help me learn trombone.  Without her I would never have moved on from the flute – let alone have any desire to try French horn!  She made myself and so many others better musicians.  I wish her the absolute best with her future endeavors!”

“Jenn gives her students the strongest foundation of musical skills. She prepares them so well in these beginning years, and it allows the directors at the middle school and high school the chance to take the kids even further along their musical path. She is so focused on the students and truly cares about their progress. She doesn’t treat them like little kids — she treats them like professional musicians. I really admire her inspiration at all times, and her incredible energy.“

Scituate High School’s choral music specialist and longtime department chair Bill Richter, another friend and colleague, credits her with creating the music foundation for many students that lingers into their teens and adulthood, allowing them to continue pursuing diverse music interests.  He shares that he’ll always think of Jenn as “the consummate teacher and colleague.  She is always willing to be there for the students and teachers.  She’s flexible and shows respect, and earns that back in return.  She really cares for the kids – always, and that’s a number one priority.”

Retirement is always bittersweet, and while Jenn will most certainly miss her Scituate students, colleagues and friends, she is excited for what’s in store for the next chapter of her life.  On the horizon she plans on traveling, visiting family on the West Coast, and continuing to perform with her current group, the Kaleidoscope Chamber Ensemble.  One of her retirement goals is to perform again Johannes Brahms’ Clarinet Quintet op. 114, a cherished piece she enjoyed during her performing artist years, in her eyes a work that every clarinetist aspires to perform.

Having dedicated her career to the music education of so many young children will most certainly have a lasting legacy on the Scituate community, its students, families and memories.  With so much history ingrained into the story of thousands of young Scituate musicians, Jenn will certainly be missed in the community’s music programs, but her lifetime of dedication guarantees that her efforts will never be forgotten.