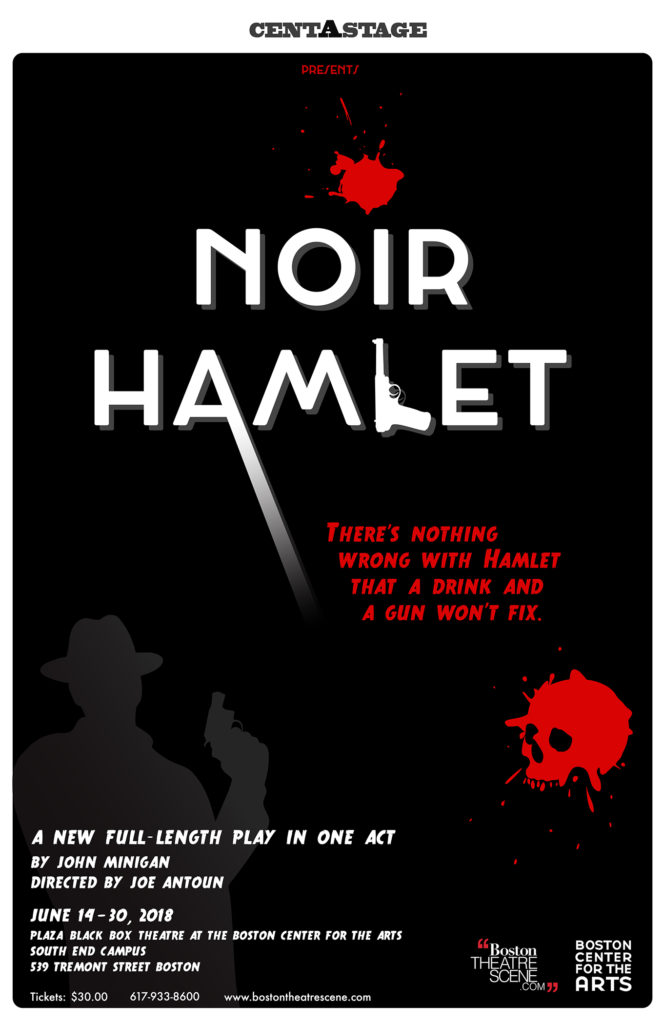 There’s nothing wrong with Hamlet that a drink and a gun won’t fix! Noir Hamlet is a wild re-imagining of the Shakespeare classic. The action takes place at various locations in and around Los Angeles.  The year is 1949.  There’s never a good time to find yourself on the roof, twelve flights above the sidewalk, not sure if you’re alone. Will Hamlet get the better of rival detective Paolo Niro, discover the truth of his father’s death, keep his mother Gertrude from marrying the guy who may have aced him, and hold on to the love of his secretary Rae Chio? It’s a case with more twists than a gallows necktie, and Hamlet will be lucky to keep his own neck out of the squeezer.

Playwright John Minigan is a Massachusetts native with original works developed and workshopped at the New Repertory Theatre, the New American Playwrights Project, Actors’ Repertory Theatre of Vermont, and the Orlando Shakespeare Theater.   John’s play Queen of Sad Mischance is a finalist for the 2018 O’Neill National Playwrights Conference.  His play Breaking the Shakespeare Code was nominated for a 2014 Elliot Norton Award for Best New Script.  He is a member of the Dramatists Guild, StageSource, Write on/Centastage, and the Citywrights playwright group.

Established in 1991, Centastage is dedicated to the development and production of new plays, offering a voice to New England playwrights and theater artists.  Centastage believes that the future of theatre is dependent on the support of new works, providing that outlet through a writing group, readings and productions.  Centastage cultivates audience interest by providing opportunities for new and non-traditional audiences to experience diverse programming and original works for the stage.   Advancing the artistic growth of regional playwrights is at the center of the organization’s mission.

The Point : : Two Local Music Festivals Back for Live Performances