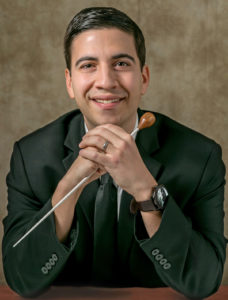 CAPE COD CHRONICLE – The newly-organized Cape Cod Chamber Orchestra will debut on April 15 with a concert blending music and poetry as a salute to National Poetry Month.

Matthew Scinto, 27, who directs the bell choir at Pilgrim Congregational Church in Harwich Port, founded the new 25-piece orchestra consisting of friends and colleagues from the Boston area after moving with his wife Cara to Brewster last August. He will conduct the debut concert.

When Scinto, a native of Fairfield, Conn., first arrived on the Cape he asked himself: “Where are all the professional orchestras?” he recalled during a telephone interview last week. “I thought there was a void.”

Yet the Cape has an edge over the crowded Boston music scene where “people have many opportunities to hear music every night of the week. Out here it’s not that way at all,” he says. In other words, a new group here will be noticed. With the new orchestra Scinto hopes to introduce more concerts, music education and special collaborations to the community.

“I hope the orchestra finds a way to bring together the various arts communities on Cape Cod,” he says.

Scinto is a 2017 graduate of Boston University with a doctorate in musical arts in orchestral conducting. He is also assistant conductor of the Boston Civic Symphony. He trained as a pianist and violist and studied conducting at the Tanglewood Music Center. 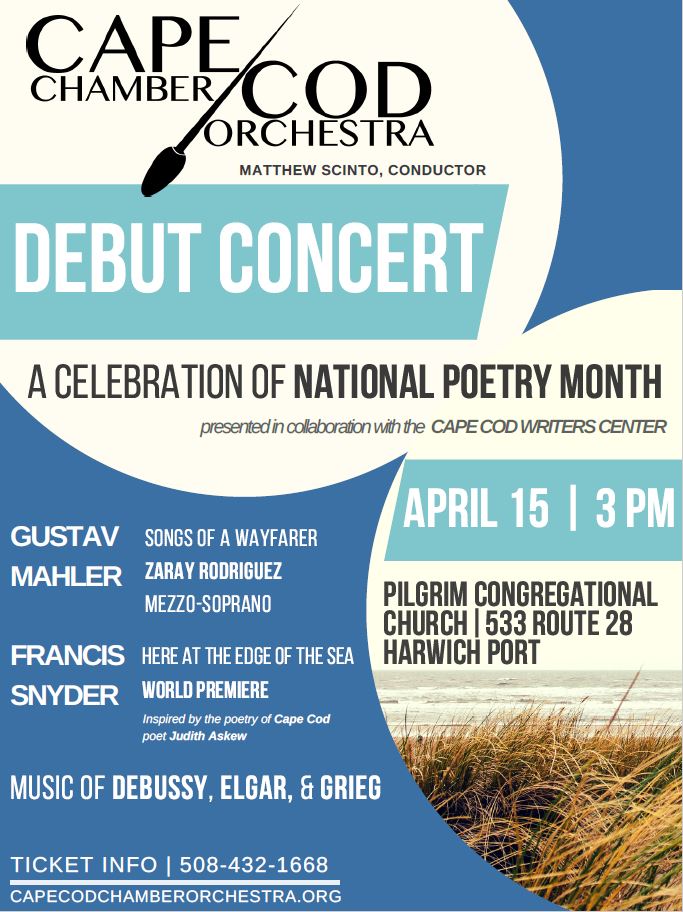 The initial concert will be held during National Poetry Month, and for that reason Scinto wanted to do a concert inspired by poetry. He also likes to work with young composers, because “then I can really craft a program,” he says. “It’s a really beautiful thing.” Through the Cape Cod Writers Center he got in touch with 10 poets, and then holed up in the library reading their work. He was touched in particular by a 2008 book of poetry called “Here at the Edge of the Sea,” by Judith Askew of Cotuit.

“I knew she was the one,” Scinto says. “I fell in love with the poems. I was really moved by her words.” After contacting Askew, who he says was thrilled, Scinto asked her to listen to the original music of his composer/conductor friend Francis Snyder of Boston to see if it spoke to her. Since 2014 Snyder has been the composer-in-residence at the Acadia Repertory Theater in Maine. In 2016 he composed a piece to celebrate the centennial of Acadia National Park.

And Snyder’s music did speak to Askew. Together, then, Scinto and Snyder read through Askew’s poems and selected three which Snyder then set to music. During the performance Askew will read a poem and then the chamber orchestra will play the new composition, for a set of three poems and three compositions. “People can digest and form their own interpretations,” Scinto says.

Askew is a native of Cape Cod and has worked as a writer, educator and editor. As a college student she wrote a weekly summer column for the Barnstable Patriot. In 1978 she co-edited a collection of women’s poetry. Her 2016 book “On the Loose” won the First Annual Poetry Collection Competition sponsored by the Bass River Press. Poet Tony Hoagland judged the competition.

In another nod to National Poetry Month, Scinto contacted Lisa Forte-Doyle in the English department at Monomoy Regional High School. Coincidentally, Forte-Doyle had studied classical voice before studying for a degree in English. She and her class just finished writing a book, and the poetry from that book will be enlarged and displayed on poster boards in the church’s sanctuary during the concert.

“I’m really impressed with the student work,” Scinto says. “I hope it will bring in younger people.”

This spring Rodriguez will be featured in the Boston University Opera Institute’s performance as Florence Pike in “Albert Herring,” and Genevieve in “Pelleas et Melisande.” She will return to the Aspen Music Festival this summer.

Scinto hopes the varied program will attract both those who have never heard an orchestra perform and seasoned music lovers. He is happy that his first concert includes music from both old and new composers and celebrates poetry, creativity and art on Cape Cod. He plans further events in the fall.

The Cape Cod Chamber Orchestra’s debut performance will be on Sunday, April 15 at 3 p.m. at the Pilgrim Congregational Church in Harwich Port. General admission tickets are $25 if purchased before April 15 or $30 at the door. Students are $15 and those under 12 are free. Tickets can be purchased online at capecodchamberorchestra.org, by calling 508-432-1668 or at the door with cash or credit.

And on Saturday, April 28 at 12:30 p.m., as a part of Massachusetts ArtWeek, Scinto will perform for one hour with a string quartet during the open house at the Harwich Cultural Center. A brief question and answer session will precede the performance which is free of charge.