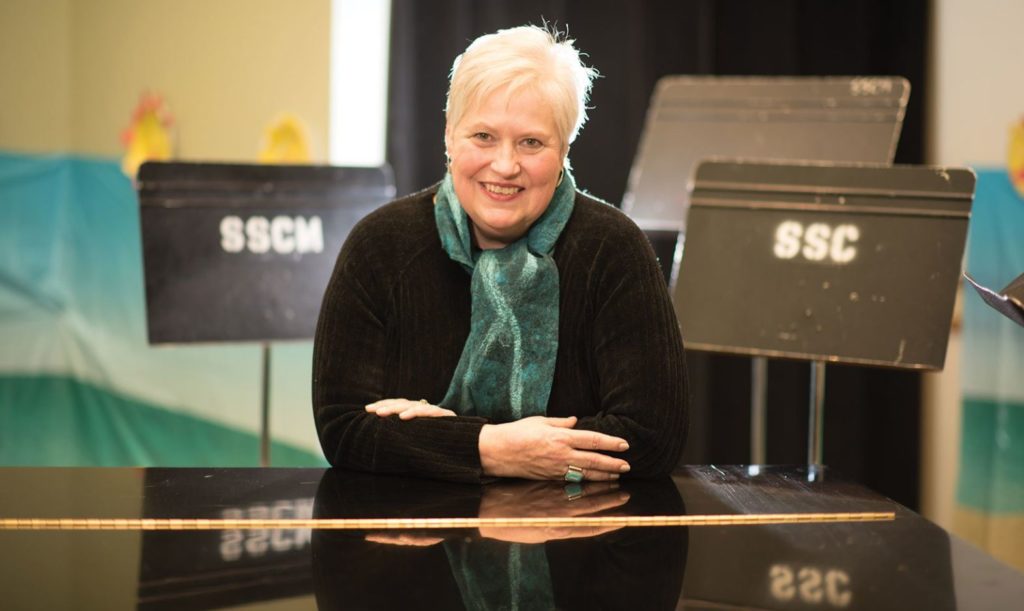 South Shore Conservatory president Kathy Czerny has helped to transform what was once considered an exclusive music school into a cornerstone of the community.

SOUTH SHORE LIVING – Kathy Czerny, the president of South Shore Conservatory (SSC), developed an appreciation for the arts at a young age, often starring in family talent shows. “I actually had my first performance on stage when I was 2, for my mother’s sorority,” says Czerny. “I tell people I’ve been involved in music and fundraising since I was 2.”

Growing up in Salt Lake City, Utah, Czerny was guided by her grandmother, who played piano for silent films. Czerny learned to play piano and sing, performing in an a capella group and chamber ensemble in high school and college. She went on to do graduate work in art history and later ran an art gallery in Tennessee. Czerny returned to music in the early 1980s, when she moved to Rhode Island with her husband and two young daughters.

“I was looking for lessons for my children and there was a school in Rhode Island that wanted to hire someone as assistant director,” says Czerny. “I thought it would be a great little part-time job. It ended up being 50 hours a week, but it became my passion.”

Czerny served as the director of education and outreach at the Music School for the next 18 years, where she helped the program thrive. “I was lucky because I had to learn how to do everything,” she says. “I had to hire faculty, I had to learn how to be a public speaker – I knew how to sing on stage, but I had never done those other things before.” Eventually, she helped merge The Music School with the Rhode Island Philharmonic Orchestra, the first successful collaboration of its kind in the country. When a recruiter called in 2005 to see if she’d like to interview for her current post at SSC, she said no. She wanted to help the Rhode Island-based school continue to grow. But the recruiter insisted, and when Czerny came to Massachusetts she was struck by the passion of SSC’s board as well as their admirable educational mission.

The music school was founded in 1970 in Hingham and opened a second campus in Duxbury in 1980. While the school had already grown to offer arts education to people of all ages, when Czerny took the helm in 2006, the economy was declining and so was enrollment. However, by 2009 the student base was growing exponentially – some years by 20 percent – and it has only continued to expand. Now the largest community school for the arts in New England and among the top 20 in the nation, SSC serves 3,000 students between its two campuses, as well as an additional 5,000 through outreach efforts and public performances. “It was important to move beyond our four walls to bring arts education to the entire South Shore,” says Czerny.

The school offers on-site, private lessons in a variety of musical instruments as well as voice, drama workshops, dance and performing opportunities and annual programs like the Duxbury Music Festival and Evenings Under the Stars. It has also fostered community partnerships with local organizations like the Brockton Public Schools, where SSC’s ImagineARTS professionals bring the arts into the classrooms.

Czerny also helped to launch a creative arts therapy program that includes music therapy, adaptive yoga, visual arts therapy and dance therapy. And there’s more: There are plans to open a third SSC campus in Hanover in the spring of 2020. The new facility will focus largely on creative arts therapy, while offering a new 300-seat performance hall and multi-use center.

For Czerny, the expansion is all part of the school’s mission to bring people together through arts. “I know how music shaped my life growing up,” she says. “The power of music and the arts to build a better society is something I’ve always believed in.”

The largest community school for the arts in New England, South Shore Conservatory offers a wide range of classes at its campuses in Hingham and Duxbury and there are plans for a third campus in Hanover that will further expand the school’s reach.