The Plymouth Philharmonic, affectionately known as The Phil, will, once again, present the 100-voice Plymouth Children’s Choir, launching into Leonard Bernstein’s “Something’s Coming” from “West Side Story” to honor the composer’s 100th birth year.

The chorus will also shine in “Double Trouble” from John Williams’ film score to “Harry Potter and the Prisoner of Azkaban,” and “Walking in the Air” from the British animated film, “The Snowman.”

Locally renowned pianist and three-time winner of the South Shore Conservatory’s Youth Concerto Competition, 17-year-old Karen Ji of Hingham, will perform Beethoven’s “Piano Concerto No. 5,” which is also known as the “Emperor Concerto.” 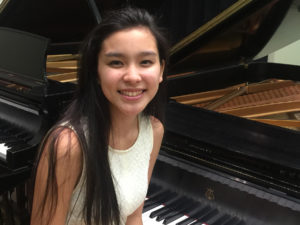 “This year’s winner is no stranger to us,” Phil Conductor Steven Karidoyanes said. “This is the third time she’s been the overall winner of this competition. She won in 2016 and also won in 2014. She is coming to us again as a seasoned professional. She has more experience working with a professional orchestra than pianists twice her age. She will blow everyone away.”

“There are female composers we never highlight and we are changing that now,” Karidoyanes said. “She’s a solid 20th century American composer and I am excited to introduce the audience to a new composer and new sound.”

The Family Concert will be held at 3 p.m. Sunday, March 11, at Memorial Hall in downtown Plymouth, with an instrument demonstration scheduled at 2 p.m. when young audience members can interact with Phil musicians who talk about and perform demonstrations of their instruments.

This concert is also a food drive. Audience members are encouraged to donate non-perishable food items to benefit the Food Warehouse of Greater Plymouth.

“Just as we have the charity toy drive, this concert is part of our national food drive called Orchestras Feeding America,” Karidoyanes added. “It would be great if, in in addition to coming to the concert, the audience brought canned or dry goods to contribute. It’s trying to do as much good as we can with the music we provide.”