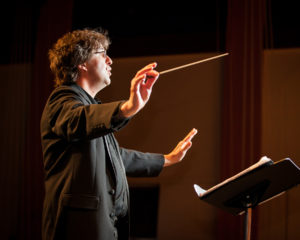 THE ENTERPRISE – The Falmouth Chorale, led by artistic director John Yankee, will present the holiday concert “Carols & Lullabies” on Saturday, December 9, at 4 PM and Sunday, December 10, at 3 PM.

A special family-friendly, abbreviated version will be performed December 9 at 1 PM. The concert will include selections performed by Falmouth Chorale and Chamber Singers, Cape Youth Chorale, guest instrumentalists and audience sing-alongs. All performances will be held at First Congregational Church of Falmouth, 68 Main Street.

“Carols & Lullabies” takes its name from American composer Conrad Susa’s work “Carols and Lullabies: Christmas in the Southwest,” the centerpiece of the concert’s first half. Mr. Susa’s collection will be preceded by a cappella selections performed by Falmouth Chorale Chamber Singers to set the holiday mood. The full chorale will process into the hall singing, with the audience, “O Sanctissima.” 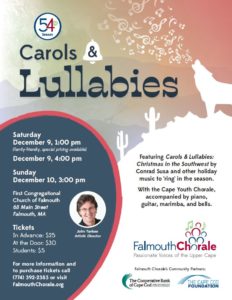 “Carols and Lullabies” originated as a suggestion from Philip Brunelle, artistic director of the Plymouth Music Series of Minnesota (which eventually commissioned the work and premiered it in 1992). He suggested that Mr. Susa compose a companion to Britten’s “A Ceremony of Carols.” At the time, Mr. Susa served as composer in residence for Old Globe Theater in San Diego.

After a few years of wrestling with the idea, a friend of Mr. Susa shared a group of traditional Spanish carols that he had sung as a child in Arizona. Consistent with his experience as a composer of operas and music for theater, Mr. Susa ordered the songs to form a narrative. He composed connective music, added guitar and marimba, and re-conceived the carols—all with the image in mind, in his words, “of a Southwestern piñata party for the new baby.” 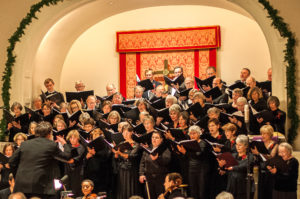 Artistic director John Yankee pointed out that the musicians and instruments required to perform “Carols and Lullabies”—guitar, marimba and harp (the latter covered by Stephanie Weaver on piano), are also incorporated in other works in the program. This scenario created some arrangement challenges, which inspired Mr. Yankee to color the whole holiday musical experience with unusual sounds and textures.

Guitarist Joseph Scott has performed on guitar and lute, as well as in vocal ensembles, in a wide range of styles since he was a teenager. His most recent performances include solo guitar recitals at Worcester State College and the Church of the Messiah summer concert series. Mr. Scott has performed with the Cape Cod Symphony, the Rhode Island Philharmonic, the Boston University Opera and the Colorado String Quartet. He serves on the faculties of Worcester State College and Cape Conservatory.

Following intermission, a bell theme will govern the remainder of the program, beginning with Cape Youth Chorale, echoed by the full chorale and the audience in carols, including “I Heard the Bells on Christmas Day” and “Ding Dong Merrily on High.”

“’Twas the Night Before Christmas” is based on the Clement Clark Moore poem “A Visit from St. Nicholas,” which was first published in 1823. The iconic poem was set to music by Ken Darby and recorded by Fred Waring and his Pennsylvanians in 1942. The chorale will present the Harry Simeone arrangement of the poem.

The program will conclude with the Cornish “Sans Day Carol”; the finale of Mr. Yankee’s “Songs in the Air”; “It Came Upon the Midnight Clear” featuring children; and, finally, “The Vesper Hymn.”

The family-friendly performance of “Carols & Lullabies” will include some selections from “Carols and Lullabies: Christmas in the Southwest” and the complete “’Twas the Night Before Christmas.” The Cape Youth Chorale will perform its bell-themed medley and will help lead audience participation in familiar carols. John Yankee will provide spoken introductions and explanations to help younger attendees and their families more fully enjoy the experience.

Tickets to “Carols & Lullabies” are $25 in advance, $30 at the door and $5 for students. Admission to Saturday’s family-friendly concert, appropriate for accompanied school-age children, is $5 for children and $15 for adults, with a $35 per family maximum for two adults and children.