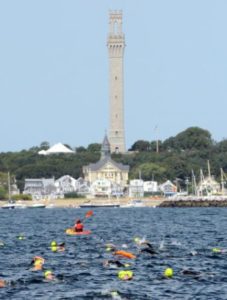 PROVINCETOWN – Four hundred years later, townspeople may have the opportunity to band together to celebrate the landing of the Pilgrims in 1620 in Provincetown, according to planners for the town’s 400th anniversary celebration.

“There are precious few opportunities where we can all get around a cause,” said Michael Glasfeld, chairman of the nonprofit Provincetown 400, which is planning events and celebrations from now until 2020.

Glasfeld, who operates a ferry service between Provincetown and Boston, spoke to a group of about 140 people Thursday at Sage Inn Provincetown, which hosted the free celebration kickoff with refreshments, a cash bar, live jazz and speeches.

“This is bringing us together for a common goal,” event master of ceremonies and restaurateur Ron Robin said.

Provincetown’s 400th anniversary celebration is part of state plans under the auspices of the Plymouth, Massachusetts 400th Anniversary Commission, which Gov. Charlie Baker reaffirmed last year. The Provincetown Board of Selectmen is represented on the commission along with the Mashpee Wampanoag Tribe, the Wampanoag Tribe of Gay Head and a handful of other groups and individuals with ties to the Cape and Islands.