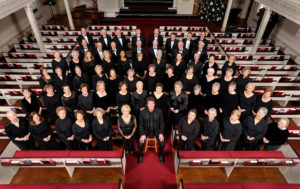 The program includes works by Vivaldi, Bach, and Handel, as well as other important composers who contributed to music of the Baroque period, stretching from about 1600 to 1750.  This extremely productive period for vocal and choral music produced the first operas, larger-form cantatas and oratorios, including arias and independent art songs.  The modern orchestra was also developed during this era — both in musical forms and new instruments. 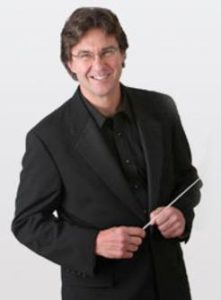 When asked how he decided what to include in the concert from this fruitful period, Artistic Director John Yankee responded “it was harder to decide what NOT to include!”  He chose composers who made major contributions of music for voice in a variety of musical forms, tonalities, moods, languages, vocal groupings and accompaniments.  The resulting program represents the early, middle and late stages of the Baroque period, including works by Italian, German and English composers. 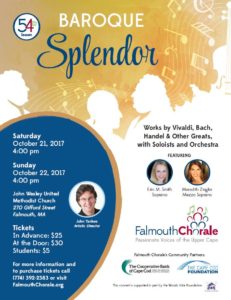 As the full Falmouth Chorale takes the stage, the string instrumentalists perform Pachabel’s well-known “Canon.” John Yankee promises an interpretation, unlike which most people are familiar.  The work concludes with a lesser-known “Fugue,” part of the composer’s original concept.

The Chorale performs three short, classic works by Hassler, Lotti, and Telemann, all sung a cappella.  The concert’s first half concludes with Handel’s majestic “Zadok the Priest,” featuring chorus and orchestra performing together in joyous celebration and pageantry.

The second half of Baroque Splendor opens with soloists Ziegler and Smith singing the well-known Bach duet, “Eilen Wir mit Schwachen.” Dixit Dominus follows, the concert’s central work, performed by soloists, 5-part chorus, and orchestra — including two oboes, trumpet, strings and timpani.  In his quest to program a lesser-known work by Antonio Vivaldi, Yankee was drawn to this setting of Dixit Dominus.  “The music grabbed me — particularly the fascinating solo trumpet part!” shared Yankee, a trumpet player himself in earlier years. 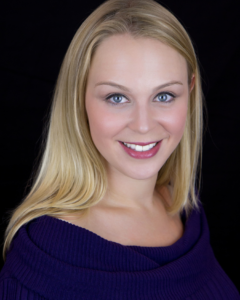 Italian baroque music authority Michael Talbot comments “Dixit Dominus RV 595 is overall a strong work. The brilliance of its opening movement, reprised . . . as the penultimate movement, the superb pacing and resourceful harmony of its second movement . . . and the inventiveness of the fourth. . . which pits two sopranos against two obbligato cellos, place it among the more memorable sacred vocal works of [Vivaldi’s] first period.”

The program culminates with the majestic, soaring, powerful Dona Nobis Pacem, the final movement of Johann Sebastian Bach’s Mass in B Minor, his “magnus opus.”

Praised for her “rich and beautiful voice” (Petoskey News-Review), soprano Erin M. Smith is a versatile and dynamic soloist performing throughout New England. She most recently appeared as featured soprano soloist with Portsmouth Symphony Orchestra and numerous pops and operatic concerts with the Hillyer Festival Orchestra. She has performed as oratorio soloist with notable choruses and orchestras throughout New England, and has been featured in numerous premieres of newly composed works. Internationally, she has studied and performed in Italy and Austria. 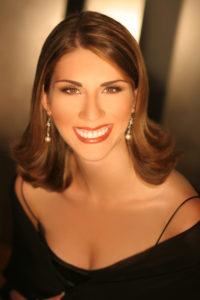 Meredith Ziegler has impressed critics and audiences alike with her warm lyric mezzo-soprano voice and engaging characterizations.  Ziegler has performed many leading operatic roles, and also serves as a Resident Artist with Connecticut Opera.  Internationally, she performed in Graz, Austria as a soloist with the AIMS Festival Orchestra for performances of Bernstein’s Arias & Barcarolles.  Stateside, she has been featured in concert with The Falmouth Chorale, Holyoke Civic Symphony, New Haven Oratorio Choir, and was a member of the Metropolitan Opera Extra Chorus.  She has been a young artist with Opera North, Connecticut Opera, and AIMS in Graz and was an award winner in multiple opera competitions.  Having earned undergraduate and Master’s degrees in music and education from the University of Connecticut, she currently teaches voice at the University of Connecticut and maintains a private studio.

Tickets to Baroque Splendor are $25 in advance for adults, $30 at the door, student tickets are $5. To order tickets or for more information, visit falmouthchorale.org, call 774-392-2383, or follow The Falmouth Chorale on Facebook.

About The Falmouth Chorale

The mission of The Falmouth Chorale is to share with our audiences the joy of singing and to communicate with passion the marvelous and varied choral music that has been created over the centuries. Celebrating 54 years of performing choral music for audiences on the Upper Cape, the Falmouth Chorale has enjoyed membership of nearly 1000 passionate singers over its existence. Today, Artistic Director John Yankee leads the 65-voice ensemble. Fifteen members sing in the select Chamber Singers for community and private events.  For more information, visit falmouthchorale.org, call 774-392-2383, or follow The Falmouth Chorale on Facebook.