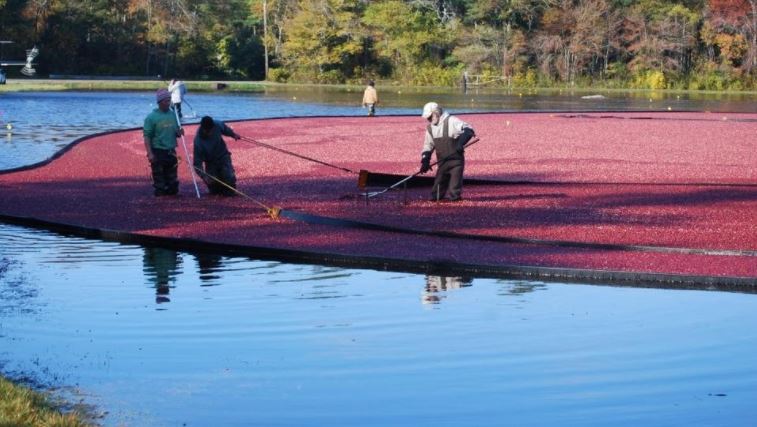 TAUNTON DAILY GAZETTE – Massachusetts cranberry growers are looking forward to a solid harvest this year, and though the total yield may be slightly less than last year the Bay State is poised to provide almost a quarter of the country’s cranberries.

The state’s cranberry farmers project a crop of 2,200,000 barrels — each barrel equals 100 pounds of the tart fruit — this year, a U.S. Department of Agriculture statistician told the Cape Cod Cranberry Growers’ Association at its annual meeting Wednesday. The total crop size is expected to be down approximately 4 percent from 2016.

The total annual crop value of cranberries in Massachusetts is roughly $68.9 million, according to the CCCGA, and the industry supports 6,900 jobs and a total economic benefit of more than $1.4 billion to the state economy.

The national cranberry crop is projected to be 9,050,000 barrels, down 2 percent from the 2016 harvest. Massachusetts remains second in cranberry growing production in the country, the CCCGA said, growing about 22 percent of America’s cranberries. Wisconsin grows 60 percent of the nation’s cranberries.

In August, cranberries are “continuing to grow in size and growers are monitoring for fruit quality,” the CCCGA said. “By late August the berries are starting to blush (turn red).” Some variety of cranberries can be harvested in mid-September and 95 percent of the crop will be harvested by the end of October.

To The Moon and Back’s 2nd Annual Adult Prom Night