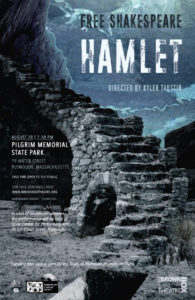 PATRIOT LEDGER.com – The Brown Box Theatre Project presents one of the most momentous and well known of Shakepeare’s plays Aug. 20.

To go or not to go – there should be no question when a touring theater company performs “Hamlet” on the Plymouth waterfront for free. After performing “Cymbaline” last summer at Pilgrim Memorial State Park, the Brown Box Theatre Project – based in Boston and Maryland – presents one of the most momentous and well known of Shakepeare’s plays Aug. 20.

“We’re excited that free Shakespeare is returning,” said Andrew Botieri, chairman of the Plymouth Bay Cultural district, which is co-sponsoring the production with the Massachusetts Department of Conservation and Recreation, which owns the park. “Not only locals, but a lot of visitors have enjoyed coming to free Shakespeare.”

The company, whose mission is to make theater accessible to all, also will hold a free participatory workshop before the performance to introduce people to the text of “Hamlet,” as well as to acting techniques. It is open to people ages 16 and up and reservations are required.

With a Boston-area cast and crew, Brown Box Theatre will tour the state for three weeks, performing at Borderland State Park in Easton, Atlantic Wharf in Fort Point, Christian Herter Park in Brighton and locations in Fall River, Somerville and Hopkinton.

As a company with young actors, “Hamlet” particularly resonates, said director Kyler Taustin, an Emerson College graduate who founded it in 2009. 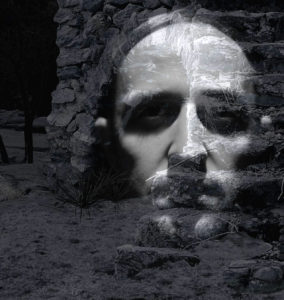 “Hamlet has some of the most beautiful language and has one of the most memorable tragic heroes,” Taustin said. “We felt connected to a young man dealing with major changes in his life because of the death of his father. He would be mourning no matter how his father died, but add to that his mother’s quick remarriage and the burden of murder. He struggles over whether or not he should take revenge and whether he is capable of it.”

In the plot, Hamlet returns home for his father’s funeral to discover his mother is engaged to his uncle. A ghost convinces Hamlet that his uncle murdered his father, which sets off Hamlet’s ruminations about betrayal and obligation, human nature, man’s place in the universe and the unknown.

Hamlet is played by Jesse Garlick, a faculty member at Boston Ballet’s Education and Community Initiatives Department as well as a freshman drama director at Newton South High School. 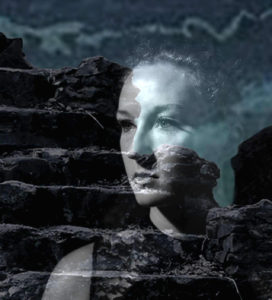 While people may think they can’t understand Shakespeare, Taustin said the 11 actors strive to make the language clear and convey meaning through their facial expressions and body language.

“If the audience misses some of the language, there are still so many ways to experience Shakespeare,” Taustin said. “What makes him universal is his ability to touch, enlighten and excite.”

As a traveling troupe, the actors of the Brown Box Theatre are like the thespians who performed Shakespeare in towns throughout 17th century England. But this company travels with its own state-of-the-art stage, set, lights and sound system.

“Even though we set it up and break it down, we don’t skimp on the spectacle,” Taustin said.

This will be the third time in five years that “Hamlet” has come to Plymouth. It was performed by the Plimoth Players in 2012 at the Plimonth Plantation Visitors Center and by the Bay Colony Theatre Company at Laura’s Center for the Arts at the Emilson YMCA in Hanover in 2013.

As audience members sit on the lawn near Plimoth Rock, they may wonder whether any of the Pilgrims saw “Hamlet,” written in 1603, or another Shakespeare play, before they left England in 1620.

“We are excited to share the play outdoors, the way it was meant to be seen and experienced,” Taustin said.