Company Theatre’s summer musical is “The Little Mermaid”, based on the Danish fairy tale by Hans Christian Anderson. It is also based on the 1989 Disney movie of the same name. It tells the story of Ariel, a beautiful mermaid who wants to become human after rescuing a handsome prince from drowning. This goes against her father, King Triton and his advisor, Sebastian’s warnings that contact between merpeople and humans is strictly forbidden.

To become human she enlists the aid of the Sea Witch, Ursula who decrees that she must kiss the prince in three days or Ariel’s beautiful voice will be Ursula’s forever. The audience sits on the edge of their seats, while waiting to see if true love can overcome all obstacles in their way. The Broadway version opened on January 10, 2008. Directors Zoe Bradford and Jordie Saucerman pick the best performers for these roles while music director Steve Bass taught the cast all the melodic songs and conducts a thirteen piece orchestra while playing lead keyboards. Choreographer Sally Ashton Forrest creates some inventive dances for the talented cast. One of the highlights of the show is the special effects. Their combined expertise wins them a resounding standing ovation at the curtain call. This musical captures the hearts of audiences of all ages.

Zoe and Jordie create some beautiful picture postcard moments in this epic musical and block them beautifully. The flying effects are terrific as Ariel and Eric fly around as they are drowning. The marvelous set is by James Valentin and Ryan Barrow while the multitude of gorgeous costumes is by Brainna Plummer. The fabulous mood lighting is by Adam Clark. Leading this cast is the beautiful blonde Sarah Kelly as Ariel. She captures this vibrant character excellently. Sarah’s lovely voice is heard in “The World Above”, “Part of Your World” and in “Beyond My Wildest Dreams.” The most intricate and melodic song in this show is “If Only” sung with Prince Eric, King Triton and Sebastian. This quartet is emotion packed, bringing tears to the audience’s eyes. Sarah is brilliant in this role. She wears a red wig as Ariel and I last reviewed her as Elle in “Legally Blonde” last summer. Tall, dark and handsome, Chet Davino plays Prince Eric who captures Ariel’s heart. He shines in this role. Chet’s strong baritone voice sells “Fathoms Below”, “One Voice” and “One Step Closer.” His acting is fantastic, too. He and Sarah have a lot of chemistry together, making the audience root for a happy ending. They are perfect in these two roles. I last reviewed Chet as a student as Curly in “Oklahoma” at Dean College.

Ronald Voce steals many a scene as Ursula. He is a hoot as this malevolent character. Ronald enthralls the crowd with his powerful voice in “Poor Unfortunate Souls” at the end of Act 1. He also sings a vaudeville type number with as Melissa Carubia as Flotsam and John Crampton as Jetsam. They slither on and off stage and display their powerful voices with Ronald. Another commanding presence in this show is Nate Ramsayer as Triton. He delivers a multilayered performance as this worried parent while scolding Ariel and later on defending her from Ursula. Nate moves the audience to tears with his “”If Only” quartet and he also sings “The World Above.” The biggest scene stealer is Davron S. Monroe as Sebastian. His “Under the Sea” mesmerizes the audience while the colorful and the awe inspiring dance is magnificent. It stops the show with thunderous applause from the crowd as bubbles fall from the ceiling. Davron also sings “Kiss the Girl”, a calypso number in the second act when he tries to save Ariel from Ursula and reunite the happy couple at last. I last reviewed him in “Showboat” at Reagle earlier this month.

The two most comic numbers in the show are “Positoovity” sung by Scuttle and “Les Poissons” sung by Chef Louis. They turn into wild and crazy dance numbers which stop the show with the cast’s excellent execution. Michael Lacey shines as Scuttle with his many funny one liners and his tap dance is terrific. I first reviewed Michael as Cornelius in “Hello, Dolly” back in 2010 for Star Players. David M. Lynch is brilliant as Chef Louis winning many laughs and displaying a terrific voice while doing so. 11 year old Colin SanGiacomo as Flounder steals the scene as he arrives to sing with Ariel’s sisters in “She’s in Love”, a 50’s style number. He also is funny as the lovesick boy infatuated with Ariel. James Valentin as Grimsby sings “Fathoms Below” and provides comic relief during the show. This marks my 14th anniversary of reviewing shows at Company Theatre. So for another one of Company Theatre’s epic musicals, be sure to catch “The Little Mermaid” before Ariel and the gang swim out of Norwell. Tell them Tony sent you. 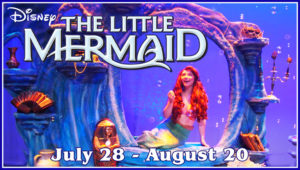