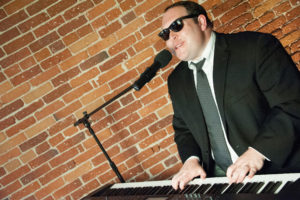 South Shore Conservatory’s Evenings Under the Stars (EUS) concert series presents Jon Abrams and his Billy Joel Band – a Tribute on Saturday, July 22, 7 pm at the Jane Carr Amphitheater, One Conservatory Drive in Hingham. The third of four concerts, this performance is sponsored by Deborah L. Allinson and Peter C. Olson.

Front man Abrams, a former teacher in the Hingham Public Schools, is one of the stars of the national Broadway tour of the Billy Joel/Twyla Tharp musical Movin’ Out. In addition to Abrams, the dynamic tribute band, which was started in 2005, features Billy’s original lead guitarist, David Brown. According to Abrams, over the years many musicians have performed with the band, but the current lineup is the tightest the band has ever seen.  Other band members include Carl Ayotte on sax, guitar and vocals, Steve Kelly on rhythm guitar and vocals, Eric Haltmeir on sax, Don Gouple on bass, and Rick Cohen on synthesizer, organ and vocals, and Sean Fitzgerald on drums.

The tribute show features as many Joel hits as can fit into a 90-minute set, and covers as much as possible from Joel’s catalog, which spans more than 35 years. Brown’s iconic guitar solos on tunes such as Allentown, This is the Time, and You May Be Right are a highlight of the show.

In addition to touring with the Broadway production, Abrams made a career out of teaching music in public and private schools. He is particularly proud of his success in the classroom during his tenure with the Hingham Public Schools, when he was in charge of the choral program for the town. He directed the fifth grade chorus at each elementary school in town, as well as at Hingham High School from 2013-2015.

Abrams currently works exclusively as a professional musician in Manhattan and serves as a session musician and a record producer at Cove City Sound Studios. He encourages Joel fans to be on the lookout for new music due for release by the New York edition of the Jon Abrams band.

Evenings Under the Stars is one of two series in the Conservatory’s diverse Summer Spotlight outdoor summer entertainment.  Summer Spotlight also includes fun Wacky Wednesdays family concerts which started its season on July 5 with Vanessa Trien and the Jumping Monkeys. All concerts take place in the Jane Carr Amphitheater at One Conservatory Drive in Hingham, which completely updated its lighting and sound system in 2015, thanks to Massachusetts Cultural Facilities Fund, a program of the Commonwealth of Massachusetts, administered through a collaborative arrangement between MassDevelopment and the Massachusetts Cultural Council, and individuals who generously donated the matching funds required as part of this grant.

The media sponsor for the entire Evenings Under the Stars series is South Shore Living.  Concertgoers are invited to join Jon Abrams for a special preconcert reception and talk.

The final Evenings Under the Stars concerts is Beguiled Again:  The Songs of Rodgers and Hart on July 29. Performances take place rain or shine.

Tickets for Evenings Under the Stars performances purchased before the day of the concert are $40 for pavilion and $25 for lawn seating. Evenings Under the Stars tickets purchased at the door are $45 for pavilion seating and $30 for the lawn. Preconcert reception tickets are $25 and include an onsite parking pass.  There is no charge for children under three.  Tickets may be purchased online at www.sscmusic.org/evenings_under_the_stars.html. For more information or to order tickets, visit www.sscmusic.org or call 781-749-7565, ext. 22.

For more information about all South Shore Conservatory programs and events, visit www.sscmusic.org or follow us on Facebook.

South Shore Conservatory, (SSC) has been providing access to and enriching the lives of South Shore residents through music and the arts for over 45 years. Recognized as a national model for arts education by the National Guild for Community Arts Education, SSC is the largest, not-for-profit, community school for the arts in Massachusetts, serving over 3500 students of all ages and abilities at its two beautiful campuses and in partnership with schools, and social service and community agencies throughout the South Shore. Students participate in more than 50 diverse programs in music, dance and drama, with performance playing an important role in overall education. With more than 100 exceptional musicians on faculty, SSC offers 30 professionally produced concerts annually.  Through innovative partnerships, SSC’s Creative Arts Therapies department supports the mental, emotional, and physical health of some of our community’s underserved members, and the ImagineARTS program strengthens pre-reading skills for young learners in Brockton Schools through integrated music and dramatic play. SSC’s campuses are located at One Conservatory Drive, Hingham, (781-749-7565) and 64 St. George Street, Duxbury (781-934-2731). SSC programs are supported in part by a grant from the Massachusetts Cultural Council, a state agency. For more information call us, follow us on Facebook, Twitter, Pinterest or Instagram or visit www.sscmusic.org.