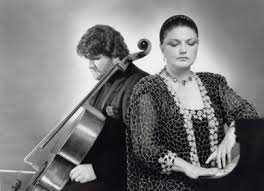 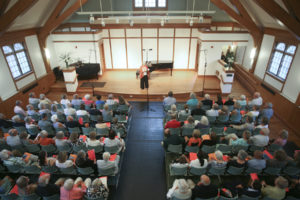 Among the pieces featured are Rachmaninoff’s 1st String Quartet, Symphonic Dances, Op. 45, Andante con moto (Tempo di valse), and Variations on a Theme of Corelli. An exciting fact about this concert is that the violin Gandelman is playing is a J.B.Guadagnini, valued at over $250K, loaned from the Yehuda Zisapel Foundation.

Concert-goers will also be treated to Russian-inspired treats such as smoked salmon and caviar and borscht cups, and a specialty vodka cocktail sponsored by Duxbury Wine & Spirits. 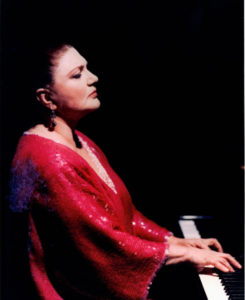 Known for her powerhouse virtuosity, exquisite sensitivity, and deep emotional drive, Moscow-born Yablonskaya has enchanted audiences world-wide.  She was introduced to the Western World in Paris at the Jacques Long-Thibaud Competition in 1963, the Rio de Janeiro Competition in 1965, and the Vienna Beethoven Competition in 1969. She won top prizes in all three competitions, and received numerous invitations for return engagements, but because of the Cold War, was not allowed to do so.

While still in the USSR, Yablonskaya performed Shostakovich’s Piano Concerto #1 with the Moscow Philharmonic under conductor Yury Simonov at the Composers Jubilee Concert in the Kremlin. She was the first performer to play Rodion Shchedrin’s Basso Ostinato, which became her signature piece. Her status as a consummate professional was heightened by many prominent Soviet and foreign composers dedicating their music to her.

In 1977 she was allowed to leave the USSR with her father and young son, Dmitry, thanks to diligent petitioning by Leonard Bernstein, Stephen Sondheim, Richard Rodgers, Katherine Hepburn, Bar Ilan, and over 45 famous writers, musicians, senators, and actors. Yablonskaya made her first New York appearance in a recital at the Alice Tully Hall in Lincoln Center only four months later, and received laudatory acclaim from the press.

Following her triumph at her London recital debut in the Queen Elizabeth Hall in 1982, the Daily Telegraph wrote: “Yablonskaya is the sort of pianist who accomplishes with ease and naturalness what others struggle for a lifetime to achieve.” In 1986, following her Canadian performance with the National Symphony under conductor Mstislav Rostropovich, a music critic of the Toronto Star wrote, “She played Rachmaninoff’s 3rd as if it was written for her.” 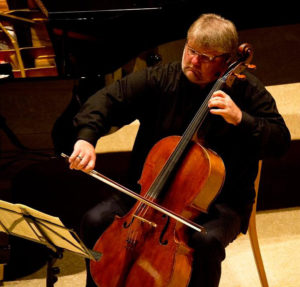 In recent years, Ms. Yablonskaya has collaborated with her son Dmitry Yablonsky, who is also performing in the DMF All-Rachmaninoff event. Their concerts have enjoyed vast public and critical acclaim. The New York Times called their Carnegie Hall debut, “A vibrant dialog.” Their recordings together include duo performances for cello and piano as well as Khachaturian and Glazunov piano concertos recorded with the Moscow Symphony Orchestra, Tchaikovsky, Rachmaninoff, Prokofieff, Brahms, Liszt 1st concertos and Chopin 1st and 2nd Concertos with Moscow Philharmonic Orchestra.

Yablonsky is also the head of international relations at the Buchmann-Mehta School of Music, and is a member of The Yolanda and David Katz Faculty of the Arts at Tel Aviv University.

Widely embraced by the South Shore community with over 200 volunteers and over 2500 patrons each season, Duxbury Music Festival’s celebrated, intensive chamber music program brings together world-renowned pedagogues and performers with aspiring young artists each summer, providing daily offerings of chamber music, student recitals, festival competitions, family events and faculty concerts. In keeping with SSC’s inclusive mission to provide access to exceptional arts education and performance…for individuals of all ages, backgrounds and abilities, DMF presents programs for all segments of the population to enjoy.

The concert will take place in SSC’s Ellison Center for the Arts concert hall and has a capacity of 150 seats.  Because of this, the concert will be intimate, the way chamber music was meant to be played and enjoyed.  For ticket and event information, visit www.duxburymusicfestival.org, call 781-934-2731, ext. 23, or follow Duxbury Music Festival on Facebook. 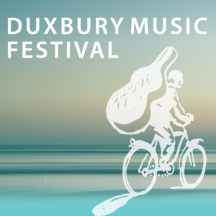 South Shore Conservatory’s Duxbury Music Festival (DMF), entering its 12th season, is a celebrated program for solo and chamber music instruction and performance. Founded in the conviction that music profoundly and permanently enriches the human spirit, DMF is an intensive 17-day program that brings world-renowned instructors, performers and aspiring young artists together in one of New England’s most picturesque bayside villages, Duxbury, MA, located 35 miles south of Boston and 20 miles north of Cape Cod. For nearly three weeks each summer, Duxbury is abuzz with a variety of musical styles in venues ranging from the Duxbury Town Green to The Ellison Center for the Arts to beautiful private seaside homes.  DMF has tremendous community support, attracting over 200 volunteers and 2500 patrons each season.  DMF is headquartered at South Shore Conservatory’s Duxbury campus at the Ellison Center for the Arts, 64 St. George Street, Duxbury, 781-934-2731.  For more information, visit www.duxburymusicfestival.org or follow us on Facebook.