WICKED LOCAL SCITUATE.com – Scituate resident David Jodka had a passion for music. A vocalist and musician who played guitar, bass and drums, Jodka had a career in finance, but music was always closest to his heart. In 2014, Jodka died from cancer at just 44 years old.

Wanting to honor his love of music and create a lasting legacy, Jodka’s wife Kathleen and their four children approached the South Shore Conservatory about establishing a scholarship in his name; and thus the David Jodka Scholarship for Future Rockers was launched.

The scholarship offers music students an opportunity to participate in a quality, actively gigging, coached rock band at the conservatory.

About 15 students from nearly every town on the South Shore auditioned for the band. Five were chosen. 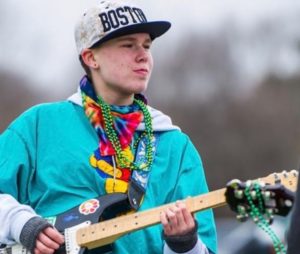 Scituate’s Darcy Milligan is one of those five.

“I was honestly dumbfounded,” the Scituate High School freshman said after learning she was a recipient of the scholarship. “I was shocked.”

Milligan’s mom had found information about the scholarship on the internet.

“It was a page on David Jodka, and about how his wife established the program with the Conservatory to continue his life-long legacy of playing music and uniting people together to enjoy and love music, as well as the ideas it brings to society,” Milligan said. “I overall loved the idea, top to bottom. The idea that you can meet all of these amazing and hard-working musicians that are your age from all over the South Shore and learn music and play with them is such an out-of-this-world idea; a once in a lifetime opportunity, definitely.”

Add the fact that “the inspirational man himself lived in my very town and walked the very streets and ground that I’ve touched for almost my entire life,” Milligan continued.

“Mrs. Jodka, and her work to bring the music and his memory all over the South Shore, is and was incredibly inspiring, and for that reason, I could not resist this opportunity.” 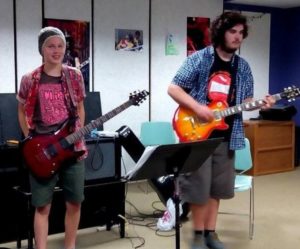 When she applied for the scholarship Milligan hoped that she would not only learn from the Conservatory’s great coaches but that she would also breed herself into an intellectual musician, not only with her ear but with her mind as well.

When she went for the call back with Erik Caldarone, who teaches guitar, bass, and composition at SSC as a part of the Jazz/Rock/Pop Department, Milligan said she was so terrified she could barely speak.

“I played as much as I could, and I thought that I had a pretty average audition. But Erik saw hope in me, I guess.”

The other scholarship recipients were Elizabeth Croteau from Hingham, Jack Holland from Plymouth, Suzie O’Neil from Duxbury, and Rose Cataudella from Marshfield.

Together, and under the guidance of Caldarone, they formed the band, Toast.

“I just would like to say that the other band members are all amazing and incredible people, and I’m definitely sure that if not for them, I wouldn’t be as good of a musician as I am today,” Milligan said.

Milligan plays guitar, bass, trombone, drums, and plays around with the flute, euphonium, and the tuba. She has been involved with music since the age of 3, she said.

“I have always had at least one guitar at my fingertips. Whether it was when I was younger and dancing to Madonna tapes or playing at gigs with one of my bands, at least one has been with me. I started seriously thinking of music and instruments when I was about 8.”

She believes she inherited her sense of curiosity for learning new instruments from her mother, who used to play the flute and the French horn in high school.

“She always told stories of her going into her band room early on school mornings, and playing whatever was there and trying to figure out how it worked,” Milligan said. “Now, she sings in the Choral Arts Society as a soprano. My father never played or did anything musical, so a lot of the musical background in my family came from my mom’s side.”

Milligan took vocal lessons with Nicole Poulter at BOSSE in Weymouth, but learned most of her guitar skills in school.

“I used to participate in these little jam sessions with one of my biggest inspirations for playing guitar, my elementary school music teacher, Mr. (Peter) Mundt,” she said. “There, he taught me how to play a gnarly 12 bar blues and how to solo well. Without him and his sessions, I probably would have never been a part of any band, never mind ‘Toast.’”

She also took trombone lessons during parts of the school day for the school concert band through elementary and middle school.

“I also don’t think I would have taken trombone seriously without Mr. (Greg) Lessard, the band director of Gates and my coach on trombone,” she said. “In other words, I probably would have never made it to SEMSBA or Districts, which are festival bands that you have to try out for, without him.”

“Under the inspiration of Erik Caldarone, I have officially written a song that has absolutely no foundation of a standard drum beat whatsoever and have snuck polyrhythms into it; it is one interesting song.”

She has also gained confidence in her performance skills, too.

“I no longer shake or stutter, I just play like I do with my door shut in my bedroom.”

Milligan is interested in pursuing a career in music, she said.

“I’m definitely thinking of doing something with engineering, more specifically a Luthier (building guitar models), and maybe on the outside of that career being a part of a band.”

Already she is one of the main songwriters for Toast and has written three songs that have been approved by Caldarone.

“That means he thinks they will add specifically beneficial sounds to our band,” she said, pointing out she has also participated in three Junior SEMSBA festivals and one Junior District festival.

“I feel the tremendous coaching of Erik and his idea of not only assessing each musician’s skill but also their character, gave Toast and the Future Rocker’s Program a great name.”

The Conservatory has done a great job with this program, Milligan added.

“Nancy, the Campus Manager, has integrated the idea that Mrs. Jodka proposed into one of the great programs in the Jazz/Pop/Rock Department – a department in the Conservatory that not a whole lot of people know about,” Milligan said. “Not only has it brought more popularity to the department, but it also inspires more kids and teenagers to follow rock, jazz, and pop bands.”

The Jazz/Pop/Rock Department does a great job of bringing together musicians from across the South Shore and, through the relationships that each musician develops with each other, inspires a safe environment for their improvement as well as a sense of unity and teamwork, one that not many people ever truly experience in their lifetimes, she said.

Toast is on Spotify. They also play at the Mad Love Music Festival in October, and have monthly basement shows at the Conservatory in Duxbury. Find them on Instagram at @toast_music