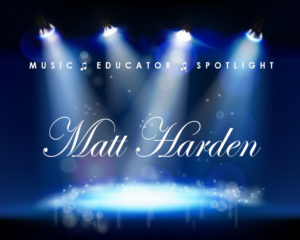 Massachusetts’ South Shore seems to have found a special place in the heart of Matthew Harden.  Raised in Ashburnham, a small town in the north central region of the state, he and his wife and their two boys now call Whitman home.  Matt is the Director of Instrumental Music, AP Music Theory, and Music Electives at Hanover High School, a position he has held since 2014.

Matt’s love of music began at an early age.  His parents noticed that he was fascinated by listening – to most everything musical.  He loved catching episodes of Evening at the Pops on television.  At age 4, his parents enrolled him in Suzuki violin lessons, but when he discovered that his elementary school didn’t have a violin program, he delved into trumpet lessons.  Though neither of his parents had developed their own musical aptitude, they always supported their adopted son’s passion for music and the arts, taking advantage of opportunities for cultural immersion in and around their community.  Throughout middle and 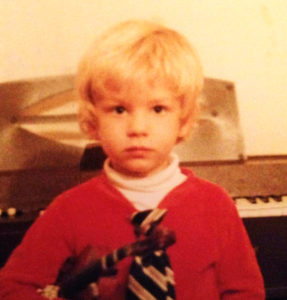 high school, Matt was fortunate to take private trumpet lessons and visual arts classes in Boston.  This path allowed him to enjoy much success as a student, including performing in All-State ensembles under the baton of Mallory Thompson and Jeff Holmes, and eventually in the All-Eastern Jazz Ensemble.

After graduating high school, a desire to share his love of music and inspire others led Matt to follow in his mother’s footsteps, aspiring to become a teacher. Matt attended UMass Amherst and earned a Bachelor of Music degree in Music Education.  At UMass, Matt was fortunate to work with many incredible artist-educators including Malcolm W. Rowell, Walter Chestnut, Jeff Holmes, George Parks, Michael Klesch, and Thom Hannum. Matt completed a student teaching placement in Attleboro before making a move New York, where he served as the band director at Union-Endicott High School for 5 years. During those busy years, Matt also earned his Master’s degree in Music Education from Ithaca College and married his high school sweetheart Maegan.

‘I have had the pleasure of knowing Matt Harden for almost two decades during his education as a graduate student at Ithaca College, as well as his service as a New York music educator and in his current position. I have interacted with tens of thousands of music educators, and he is one of the most outstanding I have encountered. As such, he is an incredibly dedicated teacher who possesses exemplary pedagogical and musical skills.” 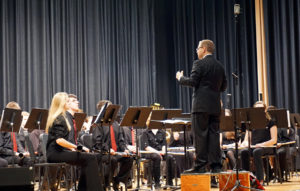 A move to the Boston area brought Matt to Rockland during the fall of 2008, where he held the position of Director of Music for grades K through 12 in the community’s public schools.  In addition to teaching beginner through high school instrumentalists, overseeing staff and curriculum, and serving on various professional committees, Matt was charged with overseeing a once struggling choral group that was on the verge of disbanding. He met the challenge, inspiring a much needed boost of energy and enthusiasm in the classroom and saved the program from dissolution.

“I consider myself a musician, but I am equally as passionate about the art and profession of teaching.” 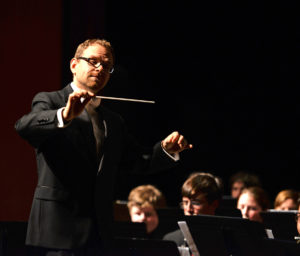 After fostering many strong relationships with both students and staff during his tenure in Rockland, Matt was hired as Director of Instrumental Music, AP Music Theory, and Music Electives in 2014 at Hanover High School, his current position.  The move feels like something of a homecoming to him, recollecting Hanover High School’s similarities to Oakmont Regional High School, his alma mater.  The transition provided a broader spectrum of programs to oversee, including a 60-student symphonic and marching band and a 20-instrumentalist jazz ensemble.  Matt also teaches AP Music Theory, American Contemporary Music, a group piano class and Music in Media, where students explore everything from film scores to video game music.  During the summer, he serves as a revered trumpet coach at South Shore Conservatory’s Summer Music Festival in Hingham, a program for elementary through college age wind, brass and percussion students that hone skills and perform in high quality wind band, chamber and jazz ensembles.  Filled with gratitude for a career that inspires him daily, Matt’s mission as a music educator continues to drive his momentum.

‘I approach every rehearsal with the hope that each student comes away with one ‘moment’ that really means something – different moments have lasting effects for different students.” 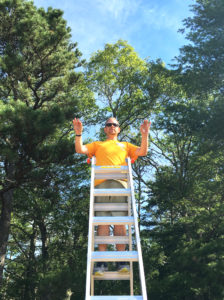 Matt believes that music allows people to be fully present, to listen to one another and respond, to connect, to be part of a community.  In an age where it is increasingly difficult for adolescents to find their niche and truly communicate effectively, Matt strives to provide a comfortable environment for his students to grow and develop lasting relationships with their peers and teachers.

“Music at the high school level is often the glue that holds student’s lives together.  Every musician can have this one place where they feel successful and accountable.  Our band is like a family.  My hope is that through the music that we study together they are able to make an emotional connection, and share that with someone that’s important to them.” 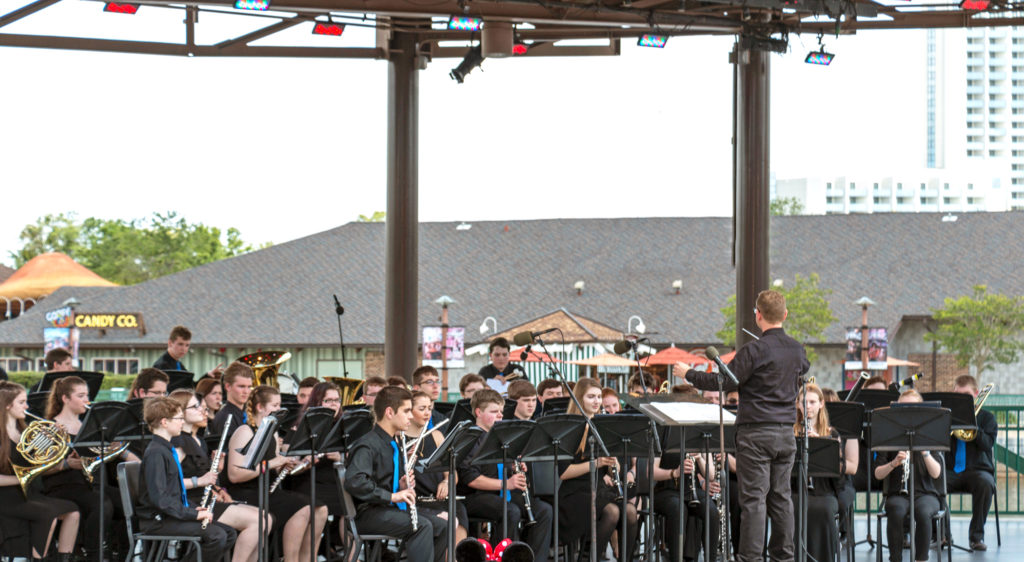 Matt’s methods show signs of affecting both students and colleagues alike, even at his young age of 37.  An enthusiasm for music and passion for teaching have profoundly impacted many of his students.  Early in his career, after Matt’s students completed a performance at a NYSSMA festival; he discovered that one student didn’t have a ride home.  With the permission of the student’s parents, he drove him home safely.  During transit, the two discussed the festival performance of Elsa’s Procession of the Cathedral.   The student exclaimed “I actually cried during that! Thank you for exposing us to this type of music!”  A proud moment for the teacher, realizing that selecting literature that resonates with his students and ensembles is a key factor in their success.

“Matt Harden is an extraordinary music educator. His care for his students, his creative and diverse programming, and his ability to work collaboratively with all faculty make him an amazing colleague. Whether he is at band camp, on the field with the marching band, or conducting at a community event, he prepares his students not only for performance, but for life.” 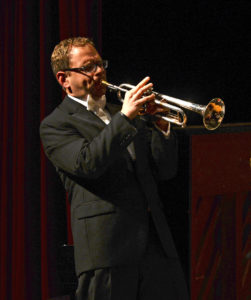 Ambitious, inspired, on a mission to inspire others

to love and appreciate music and the arts, much like himself.

Matt Harden is truly a gift to the students and community that he serves.

Matt Harden has been the recipient of many professional accolades during his career. He is honored to be a guest conductor for numerous festival bands, and is also an active composer and arranger for marching, jazz, and wind ensembles. He is a member of Kappa Kappa Psi, Pi Kappa Lambda, and was awarded an honorary life membership in the New York State PTA. He was named to “Who’s Who Among America’s Teachers” several times and is a two-time recipient of the Plymouth County Educators Association Honor Award. In service to Southeastern District of Massachusetts Music Educators Association (MMEA), he has acted as adjudicator, ensemble manager, and senior concert chair for MMEA’s Southeastern District, and is the auditions coordinator for the South Eastern Massachusetts School Bandmasters Association (SEMSBA).

An arts advocacy profile series by