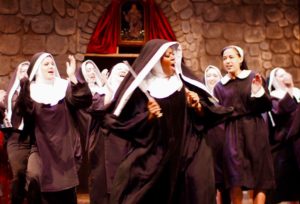 THE PATRIOT LEDGER – Much like the featured Little Sisters of the Holy Order of Our Mother of Perpetual Faith, the cast of Company Theatre’s “Sister Act – the Musical” is dedicated and fully committed to its goal of providing a thoroughly entertaining and surprisingly heartwarming depiction of this Broadway update of a Hollywood favorite. The result is a feel-good romp that charms and delights while filling the room with laughter and song.

“Sister Act – the Musical” takes the basic story from the 1992 comedy film starring Whoopi Goldberg, moves it to Philadelphia in the ’70s, and gives it a fresh rhythm and blues-funk-disco-inspired feel, complete with leisure suits, platform shoes and mirror balls.

Deloris Van Cartier (Evette Caldwell) is a nightclub singer with visions of fame and fortune until she accidentally witnesses her boyfriend Curtis (Maurice Maxie) bumping off an associate for talking to the cops. After running to the police, and running into Eddie, and old school friend/admirer, they decide it would be best for her safety to hide out at a local convent, where the sisters just happen to need a lot of help in the singing department. Delores becomes Sister Mary Clarence and learns that there might be more to life than hit records and fame. Meanwhile, the church is in financial trouble and could use a boost of energy.

Alan Menken (“Beauty and the Beast,” “The Little Mermaid” and “Aladdin”) writes the music while Glen Slater (“The Little Mermaid” and “School of Rock”) provides the lyrics, with a libretto by longtime television sitcom writer-producers (“Cheers,” “Hope and Gloria” and “Teacher’s Pet”) Cheri and Bill Steinkellner. The music is first rate, the lyrics help tell the story and the jokes are hot and happening. 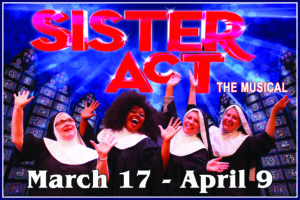 Directors Zoe Bradford and Jordie Saucerman have faithfully recreated the Broadway production of “Sister Act” for the Company Theatre, assembling a stellar and devoted cast of nuns, priests, altar boys, cops and thugs. Caldwell carries a heavy load in the lead role, but totes it effortlessly, belting out a variety of show-stopping numbers (“Raise Your Voice,” “Take Me to Heaven” and “Sister Act”) and interacts so well with the other actors. Her key relationships, with budding boyfriend Eddie (Brendan Cawley), the Mother Superior (Stacey Geer), her new nun friends Sister Mary Patrick (Bonnie Gardner), Sister Mary Robert (Felicia Martis) and Sister Mary Lazurus (Julianna Dennis) all worked well to pleasingly advance the story. Forgive us for not mentioning all 16 nuns and their many funny and uplifting scenes; they were eternally entertaining and endearing.

Geer is abundantly gifted as the understandably dubious Mother Superior. She maintains an air of authority while also establishing enough vulnerability to make her character so loveable and credible. And, it does not hurt that she has such a pleasing voice (“Here Within These Walls” and “Spread the Love Around.”) What a joy it is to see the relationship between Mother Superior and Deloris/Sister Mary Clarence blossom.

For his part, Maxie takes us back to the days of the Temptations and Four Tops, or maybe movies like “Super Fly” and “Shaft” with his soulful portrayal of Curtis the gangster. He makes a ’70s leisure suit look good, while singing “When I Find My Baby” with his three backup singers/henchmen TJ (Evan Cole), Joey (David Lynch) and Pablo (James A. Valentin). The latter three show off their comic singing ability in the progressively funny “Lady in the Long Black Dress” while bragging about their abilities with the ladies. They all add a cool factor to the proceedings in spite their nefarious characters.

All that talent and entertainment seemed quite enough, but before the end, we are treated to a stunning performance by Martis as the young postulant, Sister Mary Robert, when she powerfully sings and blows us away with “The Life I Never Led” as she contemplates her future as a nun.

Marco Zanelli is funny as the enterprising Monsignor O’Hara. Once the choir becomes popular he really gets in the spirit, donning a disco inspired vestment. All of Brianna Plummer’s costumes added to the look, feel and style of the disco Catholic theme. Steve Bass’s orchestra was pumping and Sally Ashton Forest’s choreography inspired seat and aisle dancing. Together, they created the satisfying delight that is “Sister Act.”
SISTER ACT: THE MUSICAL Directed by Zoe Bradford and Jordie Saucerman, choreography by Sally Ashton Forest, musical direction by Steve Bass. Through April 9 at the Company Theatre Centre for the Arts, 30 Accord Park Drive, Norwell, $38 to $43. 781-871-2787 or www.companytheatre.com