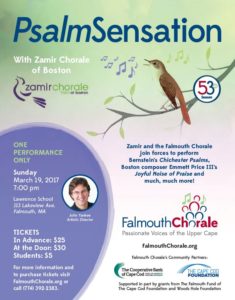 CAPE COD TIMES –  The Falmouth Chorale, under the direction of John Yankee, in collaboration with the Zamir Chorale of Boston will present “PsalmSensation,” featuring texts from the Hebrew Bible, at 7 p.m. March 19 in the Lawrence School Auditorium, 113 Lakeview Ave.

The Falmouth Chorale Chamber Singers will begin this program, featuring more than 120 singers and instrumentalists, with Handel’s “Coronation Anthem No. 4.” Both choruses will perform Leonard Bernstein’s “Chichester Psalms,” ” The Last Words of David” and Boston composer Emmett Price’s “Joyful Noise.” A solo feature by the Zamir Chorale will begin the second half of the program. The concert will end with a sacred wish. All voices will join to sing John Rutter’s composition, “The Lord Bless You and Keep You.”

Tickets – $25 in advance, $30 at the door and $5 for students – may be purchased online at www.falmouthchorale.org. 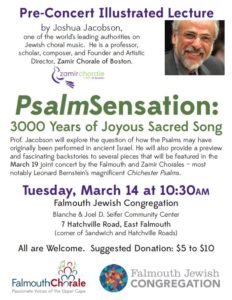 The concert will be previewed in an illustrated lecture by its co-conductor, Joshua Jacobson, a leading world authority on Jewish choral music, at 10:30 a.m. Thursday, March 16 (rescheduled due to weather) in Falmouth Jewish Congregation’s Blanche & Joel D. Seifer Community Center, corner of Sandwich and Hatchville roads, East Falmouth.

In this lecture, titled “PsalmSensation: 3,000 Years of Joyous Sacred Song,” Jacobson will explore the question of how the Psalms may have originally been performed in ancient Israel. He will also provide a preview and fascinating backstories to several pieces that will be featured in the concert, most notably Bernstein’s “Chichester Psalms.”

Jacobson is a professor of music and director of Choral Activities at Northeastern University, where he served nine years as Music Department chairman and six years as the Bernard Stotsky Professor of Jewish Cultural Studies. He is founder and director of the Zamir Chorale, an ensemble specializing in Hebrew music, as well as a visiting professor and senior consultant in the School of Jewish Music at Hebrew College.