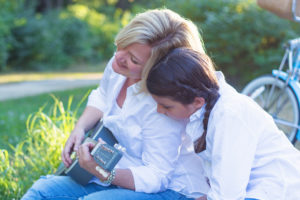 WICKED LOCAL READING.com – Parents of pre-tweens everywhere, listen up: There is finally an album geared toward the elementary-school set — and you’re actually going to like listening to it.

Thanks to Karen Kalafatas, of children’s music group Karen K & the Jitterbugs, there is now whole-family music that is fun to listen to and whose lyrics won’t have parents rushing to turn off inappropriate tunes.

With songs like the very pop-y “Without You” and country-rock “Cousin Party,” the 14-track “The Blue Bike Chronicles” clearly focuses on older kids who are done with the preschool standards and know what they want their music to sound like. Add in a few equally catchy nods to the world of parenting (the sweet ballad “Box of You” could bring many a nostalgic mother or father to tears) and suddenly those family car trips might not seem so long.

Wicked Local talked with Kalafatas about what inspired “The Blue Bike Chronicles,” what sets it apart, and why it touches a variety of audiences.

Question: What was the inspiration behind “The Blue Bike Chronicles”?

Answer: The original inspiration for Blue Bike was when my daughter Becca, at the age of 8, really wanted to listen to pop radio. She wanted to listen to Katy Perry, Taylor Swift. Some of the lyrics were so wildly inappropriate for her age. I started asking, “Why do you like this one?” and writing in styles that Becca was listening to, appropriate for the world she was living in.

There’s this whole movement that started a few years ago called “kindie”–a handful of people who started writing rock and punk for kids, various genres that parents could actually enjoy. There’s a hole in kindie music. You go from preschool right to pop music. My goal was to create music my daughter and her peers might hook into — with lyrics that reflect their world and not that of a 27-year-old adult.

Q: Are there common themes in the songs on the album?

A: Yes. Most of these songs came out of my daughter’s life at 7, 8, 9, and out of my own life at that age. “Freedom and Fireflies” is a nod to my life and how different life was then. The third theme is the parenting perspective — parenting a pre-tween, which again is very different now than it was for our parents. It’s a different world.

It’s really important to me that kids understand that what they look like, what they enjoy doing for a hobby, no matter how their family is, no matter where they’re from — it doesn’t matter. They are special. They are loved. Those positive messages that might spark some social change have become important to me. That’s not so much political as it is human to me.

Q: Is it important to think about parent listeners when making an album geared toward children?

A: It is for me. I don’t know a single parent who actually enjoys watching Barney. I think what sets my music apart a little bit is that it’s really “Everyone” music. Blue Bike is a good example of that. It really doesn’t matter how old you are. Seventy-five percent of my songs can be enjoyed by people of any age. No matter how old you are, there’s something on that album for you. That’s very important to me. 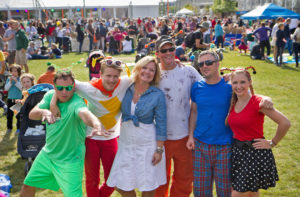 Q: What was the best part of making “The Blue Bike Chronicles”?

A: I think the process was the best part. I was so lucky to be able to work with different producers. Each one had their own work style and their own artistic style. You’ll hear it on “Freedom and Fireflies” and “Slow Roll”–you can hear Anand Nayak in that music, the flavor that he brings. And then you turn around and hear Matt Tahaney on the different pop songs, like “Being Different.”

This is a collection of songs. So it’s about each individual song. Honoring the different songs, bringing them to life, was the best part.

Q: Who are your favorite artists right now?

A: I’ve been listening to a lot of Jason Robert Brown, a musical theater producer. And I’ve been listening to a whole lot of Bob Dylan lately. Locally, Dennis Brennan is a Boston icon and should be a huge star. Eric Salt [“Hop” in Karen K & the Jitterbugs] is one of the best songwriters in Boston; I really like to watch him and hear him play. Ruby Rose Fox — I really enjoy her music and her shows. And Anna Rae. She’s just an incredible person, a real community activist. I love her music.

I’m a big fan of supporting local artists. I try to go out and hear as much local music as I can, both to support friends who are doing it and because I’m inspired by it. Boston has such a vibrant music scene. We do forget that it is a small town. It’s easier to get to places than we think.

Q: What’s next for Karen K?

A: Well, the Jitterbugs will be releasing the album “Greetings from the Bug Out” in the next year — we’ve been performing these songs for two years that we have never recorded.

But Blue Bike was mammoth. I want to enjoy that for a while. There will be a Blue Bike Chronicles #2 at some point. It’s such a labor of love and I wouldn’t trade any of it. I couldn’t be happier. 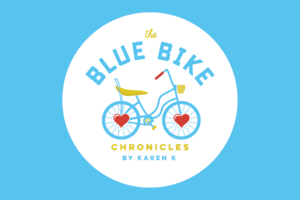 To read more about the stories behind “The Blue Bike Chronicles,” as well as purchase the album, visit http://www.bluebikechronicles.com/. For additional information about Karen K & the Jitterbugs, as well as the Kids Really Rock music festival, visit http://www.karenkjitterbugs.com/ and http://www.kidsreallyrock.com/.