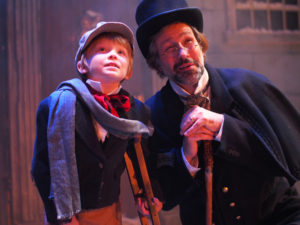 WICKED LOCAL.com – For 30 years, Charles Dickens’ classic tale of ghosts and Christmas has come alive at The Company Theatre, where the biannual production of “A Christmas Carol” has become a South Shore tradition to ring in the holiday season.

The Dickensian tale tells the story of the miserly Ebenezer Scrooge, who is haunted by three ghosts one Christmas Eve. The three spirits whisk the old man away on a journey to see glimpses of Christmases past, present, and future that teach him the error of his ways and allows him to wake up on Christmas Day a changed man.

Adapted from Charles Dickens’ novella, this musical celebrates the themes of the story and the aesthetics of the era, with sets, special effects, and a cast accompanied by a professional orchestra.

This year, the musical’s score is completely new, having been re-worked by Music Director Steve Rogers, in his first outing as musical director at the theatre.

“What was left from before was miniscule, basically everything disappeared,” Rogers said. “That wasn’t mine, and if we were going to have to do it right from the start, it would have to be a complete re-do.”

The show now contains 46 songs, 12 of which are original compositions by Rogers.

He worked with the cast, creative team, and choreographer to identify which songs had to remain (two). Then they found new ways to best fit the music in with the play in a creative and collaborative process.

“It would be easier to outline what’s the same,” Rogers said. “That’s not just me, that’s the energy that has been around this production for the whole team, since we sat down for the first meeting that they were deciding whether to take a chance on my ideas or not, and once they felt they had an understanding of what I had in mind, then they started reshaping their own thinking and they’d come back two days later with more ideas.”

Kristin Connolly, of Weymouth, a Company Theatre veteran in her 11th production of A Christmas Carol, said the changes to the show have energized the cast.

“A lot of the music is different thanks to Steve. A lot of the dance numbers get to be different and more up to what [Choreographer] Sally [Ashton Forest] has always dreamed. The costumes and hairstyles, everyone’s really trying to be on top of the period costumes and the period hair. I just think we happen to have a really great cast this year.”

Connolly, who is playing Mrs. Cratchet, was first cast in the show at the age of ten, when she played a choir boy and a school boy. She then played Belle, and most recently played the Ghost of Christmas Past—eight times, a role that is now played by her 12-year-old daughter, Nicole Hall.

“I’ve seen it every time she’s done it,” Hall said. “It’s really cool to step into her role, it’s really inspiring, because I tried really hard to get this part, and not just because she played it but because I love the part.”

Connolly said that while the cast was wary of the changes at first, they have paid off in the long run.

“It’s overwhelming at first. Christmas Carol, we always say, is like seeing an old friend. The old costumes come out that you’ve worn before and seen them, and the set comes out,” she said. “It was a challenge to learn the music and to see changes, but they’ve been beautiful changes. Absolutely gorgeous changes.”

“It’s probably one of the best productions of A Christmas Carol I’ve ever seen. It’s also been overwhelming on a personal side having a new director, because this is my home and my family, but he’s certainly stepped right into those shoes and he’s been amazing,” Connolly said.