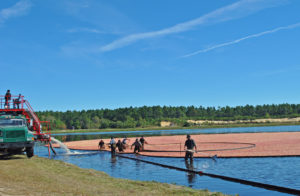 Cape Cod Cranberry Growers’ Association, representing more than 325 cranberry growers in Southeastern Massachusetts, Cape Cod and Nantucket, organized a ceremony this week to commemorate 200 years of commercial growing in Massachusetts.  The occasion also marked the origination of the industry throughout the nation.

Public and industry officials and the media gathered Monday at A.D. Makepeace Company’s Cranebrook Bogs in Carver, donning waders and engaging hands-on in a wet bog harvest, bringing in the crop with the harvesting crew. 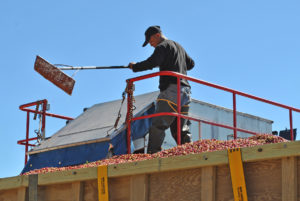 Many took aerial tours of the bogs by helicopter, witnessing the interconnectivity of water and open space to the bogs.  The event also featured the unveiling of the Association’s newly created educational traveling exhibit:  Rhapsody in Red:  200 Years of Cranberry Growing in Massachusetts, on tour throughout the region at public organizations and events through 2017.

In 1816, retired Revolutionary War veteran and sea captain Henry Hall began cultivating the first cranberry bog in Dennis, Massachusetts. Two hundred years later, in the town of Carver, the community that is home to the greatest number of cranberry bogs in the Commonwealth, attendees gathered to celebrate the birth of the current largest agricultural food crop in Massachusetts. This iconic berry is now grown over 13,250 acres of cranberry bogs, paralleled by an additional 60,000 acres of support land. U.S. Representative Bill Keating, co-chair of the Congressional Cranberry Caucus, addressed those gathered with an update on current Congress progress supporting the industry. Representative Keating’s district represents nearly 90% of the cranberry acreage in Massachusetts. 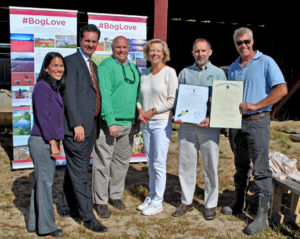 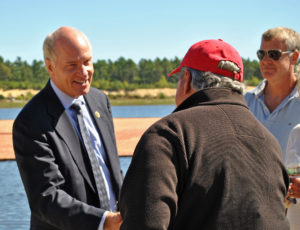 Representatives from the Massachusetts Department of Agricultural Resources, Ocean Spray Cranberries and local cranberry growers were also in attendance.  Guests learned the latest about the Massachusetts cranberry industry along with the challenges and opportunities the industry faces at 200 years, looking forward to the future. 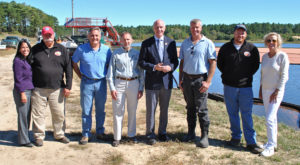 The Cape Cod Cranberry Growers’ Association represents more than 325 cranberry growers in Southeastern Massachusetts, Cape Cod and Nantucket. Cranberries are the largest agricultural food commodity produced in Massachusetts, with an annual crop value of $99.8 million.  Massachusetts is home to 30% of all North American cranberry acreage and according to a recent Farm Credit East Knowledge Exchange Report, provides over 6,900 jobs and a total economic benefit of over $1.4 billion to the Massachusetts economy. For further information, contact Brian Wick, Executive Director, Cape Cod Cranberry Growers’ Association, bwick@cranberries.org or at 508-866-7878.  For the latest updates, visit www.cranberries.org or follow the Association on Facebook and Twitter.