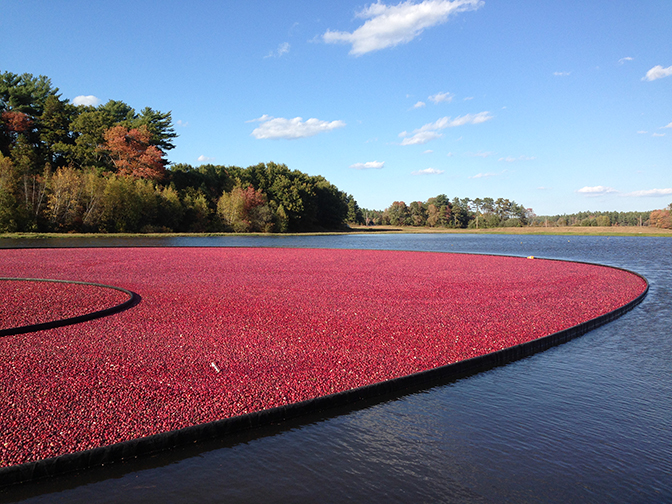 Gary Keough, director of the USDA NASS Northeast field office, presented the 2016 cranberry crop forecast. According to their report, Massachusetts is projecting a crop of 2,070,000 barrels (each barrel equals 100 pounds), down approximately 5% from the 2015 crop figures. Overall, the U.S. cranberry crop is projected to be 8,591,700, up slightly from the 2015 harvest. Massachusetts remains second in cranberry growing production in the country, at approximately 22%.  Wisconsin maintains the number one position, yielding 60% of cranberries grown in the U.S.  According to Brian Wick, executive director of the Cape Cod Cranberry Growers’ Association, the Massachusetts’ estimate is considered to be a solid crop, not dropping significantly from last year, which was the second largest crop in state history.

Massachusetts grower’s current greatest concern is the sustained drought conditions. Following five continuous months of unusually dry weather, the state declared a Drought Watch for Southeast Massachusetts and a Drought Advisory for Cape Cod and the Islands. Growing berries need rain in order to develop in size. Although bogs are built with in-ground irrigation systems, they are generally not sufficient substitution for natural rainfall, which yields uniform sizing of the fruit.

Harvest begins each year in September and continues into early November. Now is the time period that is critical to ample fruit sizing; rain is desperately needed. Reservoirs are rapidly depleting as growers have been forced to irrigate regularly due to the dry conditions and consistent high temperatures. With harvest season rapidly approaching, growers will need water to flood their bogs for picking, and also for frost protection. To protect the berries from freezing, a condition that would render them unsaleable, growers run their irrigation systems on cold nights to ensure their safety. Each of these processes require water, which is notably in short supply. Growers remain hopeful that rains will return, the fruit will size and the crop will achieve August’s estimate. According to Wick, “Massachusetts growers are optimistic by nature, although water is understandably foremost on their minds, they remain steadfast that rain will come and the berries will soon be in the proverbial barn. Now is the time for their resourcefulness to shine through and watch earnestly for some much needed rainfall.”

The Cape Cod Cranberry Growers’ Association represents more than 325 cranberry growers in Southeastern Massachusetts, Cape Cod and Nantucket. Cranberries are the largest agricultural food commodity produced in Massachusetts, with an annual crop value of $99.8 million.  Massachusetts is home to 30% of all North American cranberry acreage and according to a recent Farm Credit East Knowledge Exchange Report, provides over 6,900 jobs and a total economic benefit of over $1.4 billion to the Massachusetts economy. For further information, contact Brian Wick, Executive Director, Cape Cod Cranberry Growers’ Association, bwick@cranberries.org or at 508-866-7878.  For the latest updates, visit www.cranberries.org or follow the Association on Facebook and Twitter.