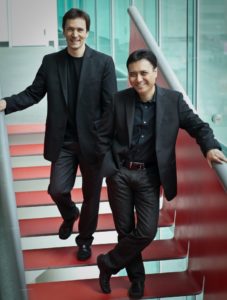 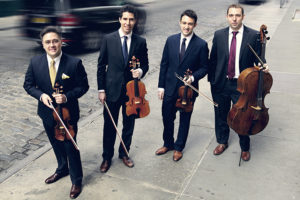 The Escher String Quartet is widely acclaimed for profound musical insight and rare tonal beauty. Helming from New York, the ensemble is a former BBC New Generation Artist, serves as Artists of The Chamber Music Society of Lincoln Center and is one of the very few chamber ensembles awarded the prestigious Avery Fisher Career Grant.  Championed by world-renowned Emerson Quartet (also appearing this season at the Festival), the Escher Quartet was invited by both Pinchas Zukerman and Itzhak Perlman to be Quartet in Residence at their respective summer festivals.

Numerous solo, concerto, and chamber music appearances in the U.S. and around the world fill out Artistic Director Jon Manasse’s impressive resume, who has served as a CCCMF Artistic Director since 2006. He has filled the role of principal clarinet for American Ballet Theater Orchestra and the Mostly Mozart Festival Orchestra and New York Chamber Symphony; served as guest principal clarinetist for the New York Pops, Orchestra of St. Luke’s, Orpheus Chamber Orchestra, and New Jersey, St. Louis and Seattle Symphony Orchestras. Has appeared as a guest clarinetist with the New York Philharmonic in concerts conducted by Valery Gergiev and André Previn, and, during the 2003-04 season, served as the principal clarinetist of the Metropolitan Opera Orchestra.

Co-Artistic Director, Manasse/Nakamatsu duo partner and American pianist Jon Nakamatsu draws unanimous praise as a true aristocrat of the keyboard, whose playing combines elegance, clarity, and electrifying power. A native of California, Nakamatsu raised international attention in 1997 when he was named Gold Medalist of the Tenth Van Cliburn International Piano Competition, the only American to have achieved this distinction since 1981. Mr. Nakamatsu has performed world-wide, collaborating with such conductors as James Conlon, Marek Janowski, Raymond Leppard, Stanislaw Skrowaczewski, Osmo Vänskä and Hans Vonk. He also performed at a White House concert hosted by President and Mrs. Clinton, in New York’s Carnegie Hall and Lincoln Center, Washington D.C.’s Kennedy Center, amongst others. He has worked with various chamber ensembles, and has toured repeatedly with the Berlin Philharmonic Wind Quintet. Nakamatsu has served on multiple international piano competition juries and has also been invited as a guest speaker at numerous institutions including the Van Cliburn Foundation, Stanford University and the Juilliard School.

Hailed by The New York Times as “A Triumph of Quality,” The Cape Cod Chamber Music Festival (CCCMF) has been a year-round presenter of chamber music and a major contributor to the cultural life of Cape Cod since its inception in 1979. Founded as the Cape & Islands ChamberMusic Festival by the late collaborative pianist Samuel Sanders, the Festival continues his legacy. Now entering its 37th season, CCCMF presents four weeks of intensive chamber music programming in a variety of Cape locations in July and August. Throughout the rest of the year, CCCMF presents autumn and spring concerts, a community outreach program, and benefit concerts in New York and on Cape Cod. Hoping to ignite the interest of a younger audience, CCCMF welcomes all youth up to age 18 to attend any regular concert free of charge. TheFestival is also host to a Composer-in-Residence program, and features composers with Cape Cod connections. CCCMF is a private, non-profit organization supported by a volunteer Board of Directors with financial support from individuals, corporations, and foundations both local and nationwide. For more information about CCCMF’s programs, schedule or tickets, visit capecodchambermusic.org, call 508-247-9400 or follow Cape Cod Chamber Music Festival on Facebook and Twitter.