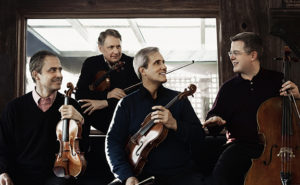 An incredible ensemble with international acclaim, The Emerson Quartet stands alone in the history of string quartets with an unparalleled list of achievements over three decades.  Joining the Festival for a fourth consecutive season, the ensemble features Eugene Drucker, violin, Philip Setzer, violin, Lawrence Dutton, viola and Paul Watkins, cello.  A highlight of their appearance is a performance of Tchaikovsky’s rarely programmed 3rd String Quartet, along with works by Beethoven and Shostakovich.

The Emerson String Quartet have accomplished more than thirty acclaimed recordings, are the recipients of nine Grammys® (including two for Best Classical Album), three Gramophone Awards, the Avery Fisher Prize, Musical America’s “Ensemble of the Year” and collaborations with many of the greatest artists of our time.

The arrival of Paul Watkins in 2013 has had a profound effect on the Emerson Quartet. Mr. Watkins, a distinguished soloist, award-winning conductor, and devoted chamber musician, joined the ensemble in its 37th season, and his dedication and enthusiasm have infused the Quartet with a warm, rich tone and a palpable joy in the collaborative process. The reconfigured group has been greeted with impressive accolades. “The Emerson brought the requisite virtuosity to every phrase. But this music is equally demanding emotionally and intellectually, and the group’s powers of concentration and sustained intensity were at least as impressive.” The New York Times

Formed in 1976 and based in New York City, the Emerson was one of the first quartets formed with two violinists alternating in the first chair position.  The Emerson Quartet, which took its name from the American poet and philosopher Ralph Waldo Emerson, is Quartet-in-Residence at Stony Brook University.  In January 2015, the Quartet received the Richard J. Bogomolny National Service Award, Chamber Music America’s highest honor, in recognition of its significant and lasting contribution to the chamber music field.

The Emerson recently released a recording with world-renowned soprano Renée Fleming on the Decca/Universal label, featuring Viennese music written in the 1920s and ‘30s.

Shared passion: Whitman husband and wife put their own spin on Bonnie Raitt with ‘Tribute’