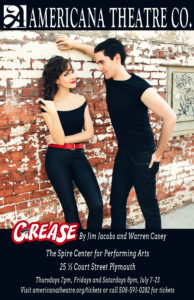 Americana Theatre Company (ATC), Plymouth’s professional theatre company, presents Jim Jacobs and Warren Casey’s Grease, the 1950’s rock musical, from July 7 to 23, on Thursdays at 7 pm and Fridays and Saturdays at 8 pm at The Spire Center for the Performing Arts, 25 ½ Court Street, Plymouth.

Dust off your leather jackets, pull on your bobby-socks and take a trip to a simpler time as ‘bad boy’ Danny and ‘the girl next door’ Sandy fall in love all over again. This Broadway hit features all the unforgettable songs from the hit movie and recent LIVE televised performance including “Summer Nights,” “We Go Together,” “Greased Lightnin’” and many more.

A stellar cast features James Edwards (EMC/SAG eligible) in the leading role of ‘Danny’.  Originally from the UK, Edwards received a BFA in Performing Arts from Savannah College of Art and Design (SCAD).  He has served both on and off stage as an actor and composer for mainstage productions. He was most recently seen in the New England tour of Alice in Wonderland, and has also been seen in film and on television.  Other theatre roles include Amadeus (Amadeus), the world premiere of Lovers and Players (Flavio and original music), Spring Awakening (Hanschen), Machinal (Defense Lawyer), Scapino! (Scapino), Into The Woods (Baker). 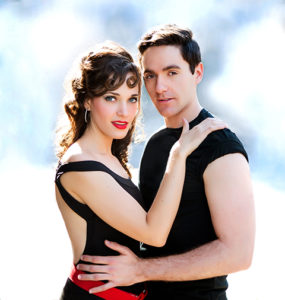 Tickets for Grease are $25 general admission, $20 for students. The production is recommended for ages 8 and up, group rates are available.

For tickets or more information visit www.americanatheatre.org or call 508-591-0282. Advance ticket purchases are recommended, seating is limited due to capacity. The Spire is handicap accessible, public parking is available street side, and in public lots in close proximity.

Americana Theatre Company (ATC) is a non-profit 501(c)3, professional theatre company serving the Greater Plymouth region, now in its fourth season. Managing Director, David Friday, Artistic Director, Jesse Sullivan, and Director of Education, Erin Friday are the leadership team charged with continuing founder, Derek Martin’s, vision of opening a professional theatre in America’s Hometown. A dream that was fulfilled in 2011.  ATC’s audiences find that story is paramount. Stories entertain, teach, and thrill us…they can inspire us toward the betterment of mankind, and help reveal the hidden mysteries of life. That is why ATC is committed to hiring directors, actors, and designers of the highest caliber.  Americana Theatre Company’s aim is to enliven the cultural atmosphere of the Plymouth community by offering excellent, entertaining theatre, and theatre education to residents and visitors alike. For more information, visit www.americanatheatre.org, or call 508-591-0282.