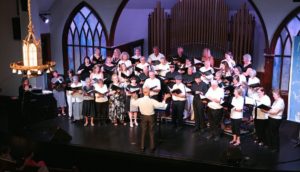 Broadway East explores some of the longest running musicals in Broadway history, including the most memorable and famous songs from each show. Each is set in a specific historic period and has a setting “east” of America. Les Miserables takes place between 1815 and 1833, Phantom of the Opera in 1881, Fiddler on the Roof in 1905, and My Fair Lady around 1910. Settings vary from 19th century Paris in two eras to tsarist Russia and Edwardian England in the early 20th century. My Fair Lady, produced in 1956, is based on George Bernard Shaw’s play, Pygmalion. Long a favorite with audiences, it includes numbers such as “I Could Have Danced All Night”, “On the Street Where You Live”, and “I’m Getting Married in the Morning”.  Fiddler on the Roof, from 1964, tells the story of a poor Jewish milkman and his five daughters. Les Miserables, a world-renowned musical based on the classic 19th century novel by Victor Hugo, opened in Paris in 1980. Phantom of the Opera, from 1986, is considered by many to be Andrew Lloyd Webber’s greatest success.

The Pilgrim Festival Chorus (PFC) is a volunteer, not-for-profit singing group dedicated to performing choral music in public and private concerts; to providing music education to its members and the public; and to encouraging and promoting the performance of quality choral music.  The PFC is funded in part by grants from many of the region’s Cultural Councils, local agencies supported by the Massachusetts Cultural Council, a state agency.  For more information about PFC, please visit www.pilgrimfestivalchorus.org, or follow Pilgrim Festival Chorus on Facebook.

The Academy of The Company Theatre Conservatory Presents The Werewolves