The Academy of The Company Theatre’s (A.C.T.) Teen Conservatory presents the charming romantic comedy Almost, Maine, on Friday, May 13 and Saturday, May 14 at 7:30 pm, at The Company Theatre Center for the Performing Arts, 30 Accord Park Drive, Norwell.  The play is written by John Cariani, and directed by Kevin Mark Kline.

On a cold clear night in the remote mythical town of Almost, Maine, residents find themselves falling in and out of love in unexpected and often hilarious ways. As the northern lights hover in the star filled sky, knees are bruised and hearts are broken. But the bruises heal and the hearts mend – almost – in this delightful midwinter night’s dream. Almost, Maine’s charm is real. It packs wit and laughs, and like love, surprises you!

Almost, Maine was developed at the Cape Cod Theater Project in 2002, and received its world premiere at Portland Stage Company, where it broke box office records and garnered critical acclaim. Almost, Maine opened Off-Broadway in 2005 at the Daryl Roth Theatre and was subsequently published. To date, Almost, Maine has been produced by over 2500 theater companies in the United States, making it one of the most frequently produced plays of the past decade! 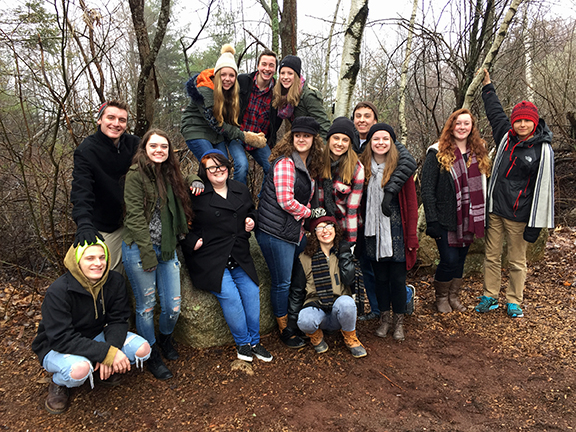 A.C.T. was founded in 1987 by Zoe Bradford, Michael Joseph and Jordie Saucerman, with a mission to discover the creative spirit in each child in an enjoyable and challenging atmosphere and to build self-confidence through the experience of the arts.

Tickets for Almost, Maine are $15 for students, $17 for adults.  For a complete performance schedule, to order tickets, or for more information, call the box office at 781-871-2787, email boxoffice@companytheatre.com, or visit www.companytheatre.com.  The box office is open Monday to Friday from 11 am to 6 pm, and during all performances. Free parking is available on site, and the theatre is handicap accessible.  For the latest information on programs and performances, please follow The Company Theatre Centre for the Arts on Facebook.

Photo:  The teen cast of Almost, Maine, pictured from left to right: