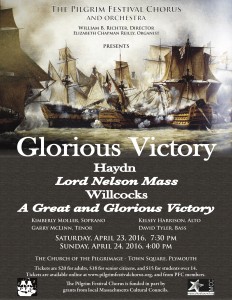 BROADWAY WORLD BOSTON –  Pilgrim Festival Chorus (PFC), the region’s principal community chorus, presents a spring concert, Glorious Victory, on Saturday, April 23 at 7:30 pm, and Sunday, April 24 at 4 pm at The Church of the Pilgrimage (COTP), 8 Town Square in Plymouth. The chorus is conducted by Music Director William B. Richter and accompanied by orchestra and Assistant Director Elizabeth Chapman Reilly on organ.

The two very different works being presented are the Lord Nelson Mass, one of Joseph Haydn‘s greatest choral works, and A Great and Glorious Victory by contemporary composer Jonathan Willcocks. These works commemorate one of the most iconic heroes of the late 18th century, Horatio Nelson. Nelson is recognized for his service as a British naval commander and considered a national hero, famous for his naval victories against the French during the Napoleonic Wars.

While Haydn’s work is well known, it has not been performed on the South Shore for a number of years. PFC’s performance of the Willcocks piece, commissioned to mark the bicentenary of the Battle of Trafalgar, is the first in the region following a rare few in the United States, including one Carnegie Hall performance directed by the composer himself. Drawing its text from contemporary accounts, hymns, the Book of Common Prayer, and the Latin Requiem Mass, it was first performed in England on November 5, 2005. 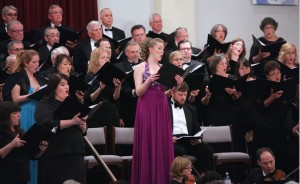 As companion pieces, these works complement each other. Haydn uses the musical language of his time and employs a solo quartet to set the text with sensitivity and exuberance. Willcocks uses both simple harmonic language and complex dissonance to tell a story that includes a battle scene and a hurricane.

Since 1999, PFC has delighted South Shore audiences with classical programming. The group of over 70 singers of all adult ages is dedicated to authentic choral singing. In addition to annual spring concerts, PFC generally presents a Christmas-themed concert in December, as well as a Messiah singalong, and summer concerts with pops-style programming.

Tickets are $20.00 for adults, $18.00 for senior citizens and $15.00 for students over 14. Children under the age of 14 are admitted free. Advance tickets may be purchased online at www.pilgrimfestivalchorus.org; and from PFC members. To reserve tickets by phone, please call Gail at (781) 826-8416. Complimentary refreshments will be served in the church hall immediately following the performance. For more information on the concert or PFC, please visit their website at www.pilgrimfestivalchorus.org, or follow Pilgrim Festival Chorus on Facebook.