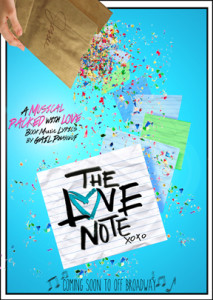 THE BOSTON GLOBE – Gail Phaneuf is mostly a New Yorker these days. The Curry College playwriting instructor is in the city, preparing to open her musical, “The Love Note,” off-Broadway. It’s a big deal for Phaneuf, whose production — a story about adolescent life in the lunchroom — was originally workshopped at Curry College in 2009. One of the original performers of the show at Curry was Jennifer Fogarty, who went on to play Wednesday Addams in the national tour of “The Addams Family.” The show has since been performed elsewhere, but this is Phaneuf’s first try at a New York City audience. “It’s just a universal story,” Phaneuf said, of the musical, which is about a young woman dealing with school cliques and a crush. “It’s not about adults working this out for kids, it’s about kids working it out for kids.” Phaneuf will travel back to Milton once a week to teach her fall classes. “The Love Note” opens at the Actors Temple Theatre on Sept. 14.

By Mark Shanahan and Meredith Goldstein