NORWELL — On an overcast Friday morning in Hull, retired Plymouth firefighter John Hannon held on to his 5-year-old grandson atop a gleaming horse as the boy took his first ride on the Paragon Carousel. The 65 colorful horses surrounding them, bobbing to waltzes and American marches, were once a popular attraction of Paragon Park, the amusement park where Hannon spent his summers when he was his grandson’s age. Condominiums have long since displaced the park on Nantasket Beach, but the carousel is just down Nantasket Avenue from its original site.

A few hours after that ride, a miniature version of the carousel — with a dozen black, brown, and white horses — spun on a theater stage for the first time. The replica is the centerpiece of “Paragon Park the Musical,” a new show that runs July 27-Aug. 19 at the Company Theatre in Norwell. The community theater production aims to resurrect a place and a time for many of the 6,300 people expected to see the show, which sold out three weeks before opening night. (An Aug. 14 benefit performance has since been added.)

With a book by Hingham resident Zoe Bradford and Holbrook resident Michael Hammond, and music and lyrics by Adam Brooks of Brookline, the show begins in 1985 — the year after the park closed — with the auction of the carousel, and retreats in time to 1905, when the park was built. A fictional love story takes the audience through four decades.

“A lot went into re-creating not only the park atmosphere, but the periods of history,” said music director Michael Joseph, who leads a 20-piece orchestra that plays the score’s 18 original songs, ranging in style from early-1900s classical music, to 1920s jazz, to rock ’n’ roll of the 1960s and ’80s. Calliope and organ keyboard effects produce the carousel tunes, while triangles and bells mimic sounds of the park.

Technical director Bob Grazioso, of Quincy, spent about 60 hours constructing a carousel that resembles the 1928 original, though it’s not motorized, and the horses are not to scale. They are children’s hobbyhorses, painted in the style of the carousel horses. And while Bradford — who is one of the show’s two directors as well as its set designer — hoped to put 24 of the beasts onstage, Grazioso successfully argued for 12.

“She wanted to duplicate [the carousel], and that was next to close to impossible,” Grazioso said after testing it onstage. “It would have been beautiful to have 24 horses 3-D, but there wouldn’t have been any stage left for the 40 actors.”

Many in the audience at “Paragon Park the Musical” are likely to have their own memories of the park: the Kooky Kastle, the Tunnel of Love, the Giant Coaster.

Anyone who ever visited Paragon Park knows the coaster, said Ken Hackel, owner of Carousel and Ships Gift Shop, near the carousel in Hull. Standing in his shop below old pictures of Nantasket Beach, he explained that it was the first thing people noticed driving to the park. “As you came around the bend where the Horizon condos are now, you would see the white wooden coaster,” he said, his eyes widening as he recalled the sight.

The coaster — relocated to Six Flags America in Maryland and still operating today — makes an appearance in the musical on one of the hand-painted backdrops and through sound effects and choreography.

Weymouth resident James Valentin, the show’s prop designer, said his challenge was re-creating objects so many people remember. The park closed before Valentin, 25, was born, so he relied on photographs to construct the scenery and props. Palm Garden, a club that hosted cabaret shows, was particularly difficult.

“That’s pretty hard to create because there’s only one picture of this club that I can find,” he said. It doesn’t help that the photo, which was taken in 1905 and has Paragon Park owner George A. Dodge’s signature on the back, is “black, white, and blurry,” he added.

Bradford dug through countless old photos and newspaper articles while researching for the show. She also visited the carousel on Nantasket Avenue about 30 times, she said.

The multiple eras kept costume designer Shirley Carney busy creating outfits that match each time period. The early 1900s were especially tricky, the Holbrook resident said as she ripped a blue ribbon off a straw hat for the ’20s scenes.

“People back then had teeny-tiny little waists,” said Carney, 59, who visited Paragon Park as a child. “They were much smaller, so anything you find that you think would work doesn’t fit [people] anymore.” 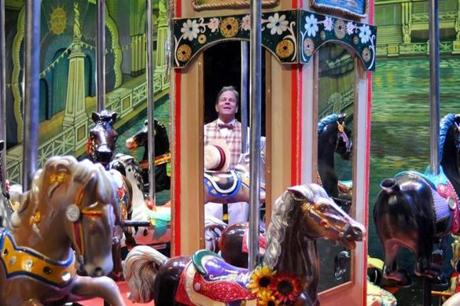 s change costumes an average of eight times, she said. For some outfits — such as the Palm Garden dancers — Carney employed poetic license.

“We have a picture of what they actually wore, and they’re not very sexy by any means,” she said, describing the clothing as “bulky.” Instead of the long coats the dancers wore, the actresses will flaunt short red jackets, fishnets, and black “hot pants,” Carney said.

But the costume designer took inspiration, too, from her own memory and those of her mother’s friends, who recall the amusement park’s earlier days. Listening to New Englanders who once rode the bumper cars and strolled the boardwalk eating cotton candy also helped lighting designer Scott Pinkney, who grew up in Pittsburgh but has friends who roamed the park.

DEBEE TLUMACKI FOR THE BOSTON GLOBE

Scott Wahle of Hingham rehearses for The Company Theatre’s “Paragon Park the Musical.”

Pinkney, who designed the lighting for “Torch Song Trilogy” on Broadway and teaches lighting design at Emerson College, uses amber and red flickering lights to replicate two fires that swept through the park in 1912 and 1963. Light also plays an essential role in enhancing the carousel. And those 24 horses Bradford envisioned? The extra dozen will make a ghostly appearance thanks to a cone-shaped light that hovers above the ride.

“As the carousel rotates under it, the shadows of the horses will come out on the floor around it, so it will multiply the horses,” Pinkney explained.

Making the carousel rotate was no easy task. Grazioso said the concept changed about a dozen times before he finally figured out how to build the structure on six platforms with wheels and pins that attach to the central tower.

As for the horses, Bradford bought some for $3 at garage sales in Maine and pulled others out of trash bins along the side of the road. For guidance on making them look like carousel horses, she consulted James Hardison, who for 25 years has worked for Friends of the Paragon Carousel as the ride’s restoration artist.

Back in Hull, standing outside the original carousel, Hardison said children, parents, and grandparents have fond memories of the ride. “There’s not many things,” he said, “that can touch multiple generations in this high-tech world.”