1. IS MY CHILD READY FOR CAMP?

Many day camps take kids as young as preschool age, but depending on the type of camp you’re considering, you need to assess your child’s maturity and sometimes even skill level before signing up.

“The biggest indicator of success with kids is if they have reasonable social skills,” says Arnie Gerson, director of Camp Bournedale, a sports-focused camp for boys in Plymouth. “Do they relate well, have good friends? Are they amenable, agreeable, that type of thing? If so, they’re going to do well at camp.”

Once you’re sure your child is ready, look at basic requirements. Some camps are open to all kids while others require certain skills or have other admissions criteria. Math, science, and technology camps, in particular, often have prerequisites (think school course work in math or a solid understanding of computer languages) while specialty camps in areas like horsemanship and music often demand various levels of experience.

For overnight camp, think about how your child has done at sleepovers with friends or relatives, as well as whether he or she is excited about the idea of going away, says Bette Bussel, the executive director of American Camp Association (ACA), New England, a nonprofit trade group in Lexington. Some camps have shorter “rookie sessions” for newbies, and most have traditions in place to help ease the transition.

2. HOW MUCH DOES IT MATTER WHAT CAMP I CHOOSE?

A lot. Over the last few decades, the summer camp industry has become increasingly specialized. More choices can mean more work, but the good news is, there’s a camp for every kid. The trick is making the right match.

“You need to find a program that is suited to both you and your child,” says Kris Ebner-Martin, director of Camp Awosting for boys and Camp Chinqueka for girls, both in Litchfield County, Connecticut. “You want to have a program where the child is extremely comfortable and has something they’re interested in. You don’t want to send them off to learn computers and they don’t really care, they’d rather sail. And the parents need to feel comfortable with the camp philosophy and know that their child is going to be safe, is going to be happy.”

Each has its advantages. Advocates of single-sex camps say they give children more opportunity to be themselves without the pressure of having the other gender around, and also that, especially for older children, many petty rivalries are avoided. “They’re able to focus on themselves,” says Kathy Jonas, director of all-girl Camp Walden in Denmark, Maine, “not ‘I’m mad at you because he likes you and not me.’ They’re not afraid to try new things. If you make a mistake or are not as good as you’d like to be, you’re really supported in this community, whereas if boys were there you might be timid even trying.”

Ebner-Martin agrees. “The girls don’t feel like they have to get up at 5:30 in the morning and put on makeup,”  she says, “and the boys can be dirty and do what they need to do and not worry that they’ll pass a girl and look like crud.”

But Gregg Parker, an owner and director of coed Camp Waziyatah, in Waterford, Maine, says putting children of different sexes together increases compassion, friendship, and a sense of equality. “Gender is an important part of the development of young people,” he points out. “They have to learn to get along and work as a team in ways that challenge them individually and as a group and that are not duplicated in school.” 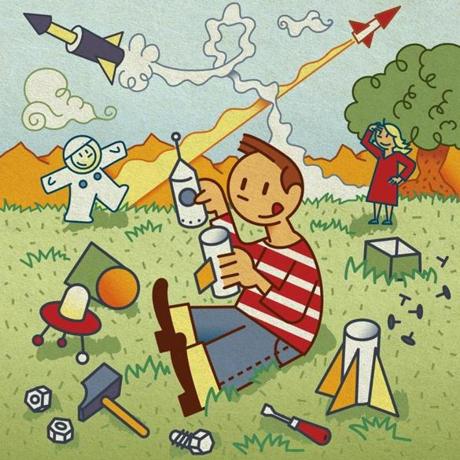 jerome studer for the boston globe

There are many aspects to the money question, starting with tuition, whether there are any extras for activities, meals, or transportation, and whether your deposit is refundable. According to Dorothy Antczak, program director of SummerQuest day camp at the Crane Estate in Ipswich, the best way to compare camp costs is to figure the cost per program hour. “The number of days per session and the hours per day can vary greatly,” she says. “One camp might run from 9 to 5 and cost $350, whereas another is the same price but only runs 9 to noon.” The second half of the equation, she points out, is value. “OK, I’m paying this much per hour, but what are you doing during those hours? What will my child come away with after a week with you?”

Remember, too, to ask about anything that can soften the blow to your pocketbook, such as financial aid, scholarships, deferred payment plans, sliding scale tuition, and discounts for bringing a friend. “There are camps out there in all price ranges,” says Bussel. “Almost all offer some kind of financial assistance, and the sooner you inquire about it the better, because there’s only so much money each camp has to help out.”

5. WHAT IS THE CAMP PHILOSOPHY?

This question comes down to the kind of experience you want your child to have. Not only do you have to decide between a specialty camp and a more traditional outdoors-focused institution, but you have to learn more about the general tenor of the camps you’re considering. “Does your child get to work in a group, collaborate with other kids, learn how to work with a team,” asks Britt Magneson, regional program manager for learning-focused Camp Invention, which has locations throughout the Northeast and in New Jersey. “Do kids get to apply the deep concepts to real-world situations? Make sure they’re not just watching the teacher do something but are actually doing it themselves.”

Ask how much flexibility children have in making their own schedules, how wide the variety of activities is, and how much unstructured social time is available. Have a camp official take you through a typical day, since “it’s not that one answer is better than another,” according to Bussel, “but what you know your own child might need.”

6. WHAT ARE THE QUALIFICATIONS OF THE DIRECTOR AND STAFF, AND THE RATIO OF STAFF TO CHILDREN?

Some camps employ high school or college students to lead younger children, while others require college degrees and a little more experience. “It can be OK to go to one with high school kids,” says Antczak, “but make sure the staff is engaged and interested in interacting with the kids and that it’s not just a job for them.”

As for the leadership, “it’s important to know how long that person’s been directing the camp and what their background is,” says Greg Matses, owner of Vermont Rock Music Camp in Essex Junction. “I try to hire not just performers but educators as well. A lot of times one doesn’t mean you’re good at the other.”

Communication, too, is important. “If you call to talk to the staff or director and don’t get a call back within a few days,” says Jen Karow, manager of family programs at the Roger Williams Park Zoo in Providence, “that to me would be a red flag.”

The leader-to-child ratio varies, depending on the type of camp and the age of the children. ACA accreditation requirements range from 1-to-5 for overnight campers 4 and 5 years old to 1-to-12 for day campers 15 to 17.

7. WHAT PROCEDURES ARE IN PLACE TO KEEP MY CHILD SAFE?

“Kids could be having a ball at camp and becoming the next Einstein,” says Karow, “but if they’re not safe, everything else goes out the window.”

Make sure the camp does background checks on all employees — CORI and SORI, the checks that schools do, are good ones — and has EMTs nearby, staff trained in CPR and first aid, and any extras that make sense for that particular camp — wilderness certification for an outdoor camp, for example, and lifeguards if there will be swimming. If transportation is involved, ask about the training and licensing of drivers, how often vehicles are inspected, and what type of insurance is carried.

8. WHAT’S YOUR APPROACH TO CONFLICTS BETWEEN CAMPERS?

You can gather some information on this from marketing materials, says Kobe Biederman, director of the Adventure Camp Sargent Center in Hancock, New Hampshire, “but if you want a specific answer to that you’ll have to call somebody and say, ‘How do you deal with this?’ ” According to Biederman, the best way to handle conflict is for the camp to stay ahead of it through program design, scheduling, and staff training. “You take a group of middle school students and provide them with too much unstructured time,” he says, “they’re going to create their own fun rapidly. And conflict can quickly erupt out of that situation.” If it does occur, he adds, counselors should use it as a “growth opportunity,” talking with the whole group about how it arose, how it could have been handled differently, and how to move forward in a positive way.

9. WHAT ABOUT THE THINGS THAT ARE IMPORTANT TO ME PERSONALLY?

“Ask every possible thing that might matter to you,” says Bussel. “For some parents, it’s the facilities: Are kids in tents or cabins? Is there a separate shower house? If you’re religious, are there services?” A great many questions are related to your child’s specific needs or what you feel comfortable with as a parent. They range from the medical (can the camp accommodate children with special needs? Can a child with food allergies be kept safe? Can someone dispense medicine to a child with diabetes or another chronic disease?) to the practical: What electronic devices are allowed? Can my child get packages from home? What are the policies regarding parent-camper communication?

“I really like parents to ask all the things that are important to them,” Bussel says. “There’s a lot you need to know about where your child’s going to go or do when they’re not with you.”

10. WHAT DO OTHERS SAY ABOUT YOUR CAMP?

To learn what kind of reputation the camp has, check three things: its return rate, accreditation status, and references.

“If it’s a good camp,” says Inga Magid, founder and educational director of Keys for Kids, a music school and camp in Lexington, “people come back again. If not, they’ll only come one time.” Return rates can differ depending on the type of camp and the program, but a good minimum return rate is 50 percent for campers. A high return rate among staff suggests a camp is well managed and can help preserve the traditions that create bonding among campers.

ACA accreditation is also important, particularly in states such as Florida that have no licensing requirements (all the New England states do).  “Accreditation is the one thing that’s standardized across the country,” says Bussel.

Finally, do a site visit so you can decide for yourself which camp is best for you and your children. Ideally, tour the camp when it’s in session — even the summer before you’d like to enroll your child, if you can plan that far in advance. “Are the kids happy, are they doing things, are the counselors engaged with them?” asks Bussel. “You just walk in and get a sense of it. You can get an idea from the Web, but there’s still nothing like seeing it in action.”

Elizabeth Gehrman is a frequent contributor to the Globe Magazine. Send comments to magazine@globe.com.